In case you missed it, last night was the American Music Awards, featuring live performances from names like Taylor Swift, Lorde, Imagine Dragons, Selena Gomez and more. Sure, now that I’m above the age 16 the AMAs don’t mean much to me in terms of oogling over artists, but it is a great opportunity to dish about fashion in an otherwise lull time before award season is in full swing!

The AMA red carpet brought some surprise favorites and some not so surprising unfavorites. Black was definitely THE color of the night, but there are some bright frocks that made it into the mix. (Thank you Elizabeth Banks!) You know how things go with music award shows by now, expect a bit of tackiness and a dash of whack to get the show on the road. Here’s the ladies who made my favorites list of the night. 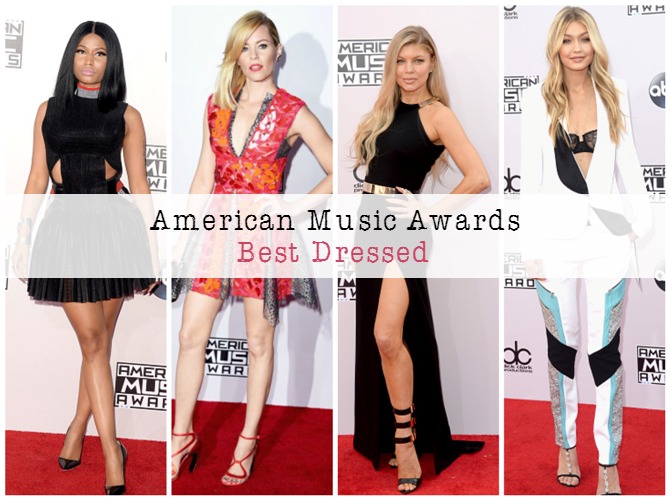 As I mentioned, there were several BLACK looks at the 2014 American Music Awards’ red carpet. Fergie hit the scene first in a black Halston Heritage gown, complete with gold belt and ankle straps. It’s been a long while since I’ve seen Fergie on a red carpet so it was a welcomed thing! Charlie XCX adorned a very old-Hollywood glam look in Vivienne Westwood Red Label, complete with a sultry red lip. And you guys, KNOW I love a red lip. So…

Onto Nicki Minaj who is a true standout favorite of the night in a Alexander Wang Spring 2015 sporty, cut-out dress. To me Nicki goes one of two ways, takes the night seriously or uses it to push a certain image. Last night, she chose to take the red carpet seriously and it was awesome. Another artist that took things very seriously is Selena Gomez in Armani Prive. Perhaps Selena took the night more seriously than most, with an emotional performance of her new song The Heart Wants What it Wants. I’m a big fan of Selena and I avidly follow her social media – her instagram stories are great and I must admit I save some so that I can watch them back. I’m really excited to watch Selena mature and evolve on the red carpet and in her music.

Olivia Munn kicked off another trend of the night, looking perhaps the best I’ve ever seen her in this shimmering gold Grecian number Lanvin. It’s so great it reminds me I still need to watch the entire second season of The Newsroom. *oops* Jordin Sparks also wore a shimmering number by Halson Heritage. I only wish she opted for a better set of shoes!

JLo/Jennifer Lopez wore a VERY barely there dress, as she does. JLo radiated in Reem Acra Spring 2015. Honestly, it’s not even fair how great she looks at her age. I didn’t look that young when I was three!

Breakout fashion star of the night goes to Zendaya in Georgine Spring 2015! For such a young artist, I was pretty blown away to see her making such a mature and definitive fashion statement. Typically the teens show up in micro-mini skirts, not an artistic pantsuit. Oh yes, and Kendall Jenner was there in Yigal Azrouel, whose name she couldn’t pronounce on the red carpet. But, I can’t even go there… #UGH

White also had its moment of the night! Gigi Hadid wore a sleek Prabal Gurung pantsuit that was equally edgy and fun. Jessie J proved that her style is improving in a crisp Prada white pantsuit of her own. But definitely the BEST of the night’s white was on Kate Beckinsale in Franco Kaufman. Seriously, does she age? Does she ever look bad? I don’t see her often but when I do I’m always thrown by how perfectly gorgeous she is. 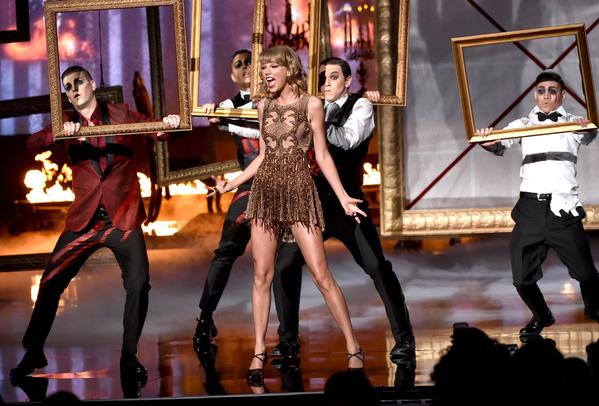 Favorite of all favorite of the night goes to Taylor Swift in Yousef al Jasmi! TayTay (as I now call her) opened the 2014 American Music Awards with a reenactment of her Blank Space video – and like the video itself, her fashion did not disappoint. I loved seeing Yousef al Jasmi pop up on my television screen. It was really unexpected – almost as unexpected as my sudden obsession with TayTay herself.

Et voila! Those are my favorite looks of the night! It’s not a short list, but you know: I like to ramble!

FERGALICIOUS she actually looked amazing, chic and elegant compared to her reminiscent trashy days, I am happy for her xx