The 2015 SAG Awards were last night, and some of Hollywood’s best actresses showed up looking pretty whacky. 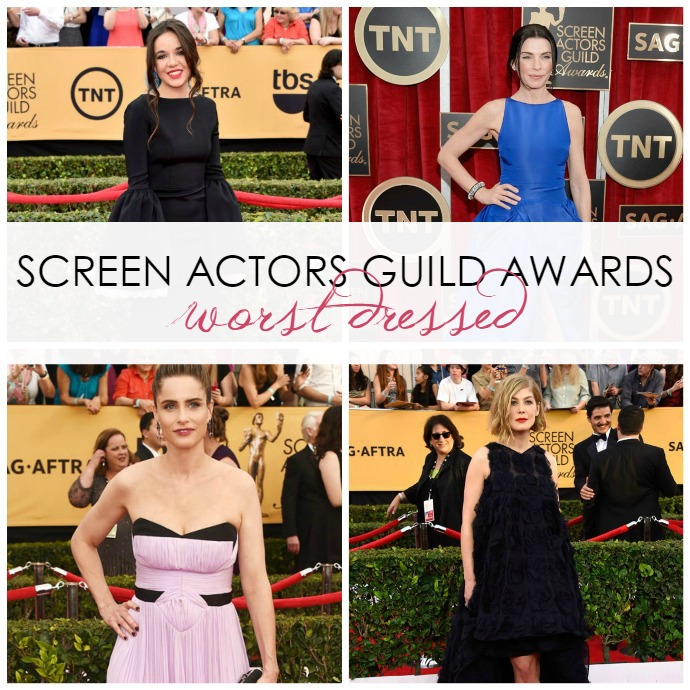 From bell bottoms as sleeves to droopiness and bruises — there was a whole lot of weirdness piling out of the limos at the 2015 SAG Awards.

There also seemed to be a contagious case of bad here going around.

Last year, my SAG Awards Worst Dressed List featured only two ladies. This year? The list is up to ten. That’s a 500% increase in fug for those more mathematically minded. It was really disappointing to see the 2015 red carpet feature so many lackluster looks but I guess we can’t be winners all the time.

Meet my pics for the 2015 SAG Awards worst dressed list, below!

I feel really bad that including Amanda Peet on the 2015 SAG Awards worst dressed list. She seems so down to earth and charming, but really needs to get a new stylist. Whoever’s dressing her now keeps forcing her into fashion risks she’s not yet equipped to pull off. Honestly, there is no shame in going with something safe!

Let’s get this girl some basics. When she conquers those, then we can start exploring with more artistic pieces such as this. Right now, she’s being set up for failure like a first grader starting out in high school. Let’s take a step back and give Amanda a great, simple Calvin Klein or Ralph Lauren. Keep it simple! (This is also serious case of bad hair #1) 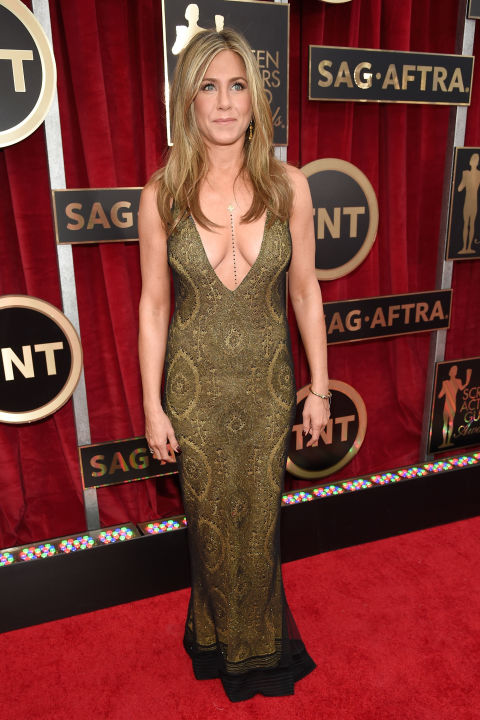 I was DELIGHTED to see vintage John Galliano at the SAG Awards, but this was just not doing it for me.

Jen was snubbed an Oscar nomination and likely expected to lose lat the 2015 SAG Awards, but in my book — it’s better to be a well dressed loser than just a loser.

As the great Anna Wintour Says: “If you can’t be better than you competition, just dress better.”

Listen to the Wintour, Jen! 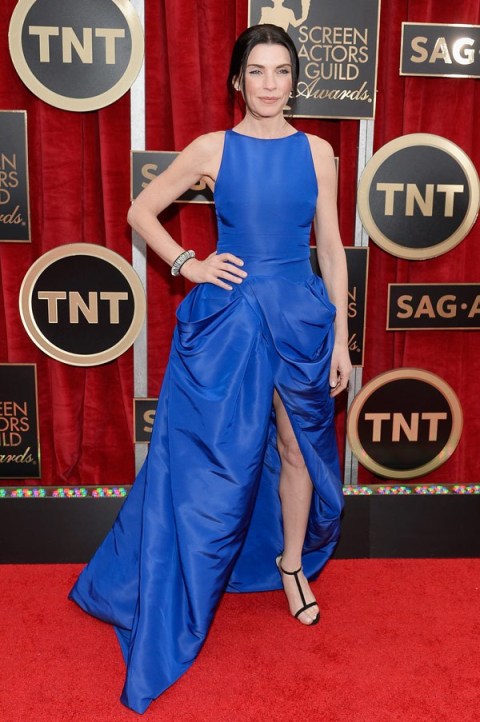 Julianna Margulies was also hit with an unfortunate case of bad hair, but that wasn’t the only thing bringing this down for me.

On the runway, this Giambattista Valli was worn with a black crop top and looked quite nice! On the 2015 SAG Awards red carpet it looks like a deflated balloon. Obviously the wind was let out of its sails when being transported from Paris to LA, but this needed to be steamed and coiffed for a day (at least) before making a public appearance.

Who knows? Maybe this is Julianna’s response to #DeflateGate? Now, the shoes. Those I can make no excuses for! 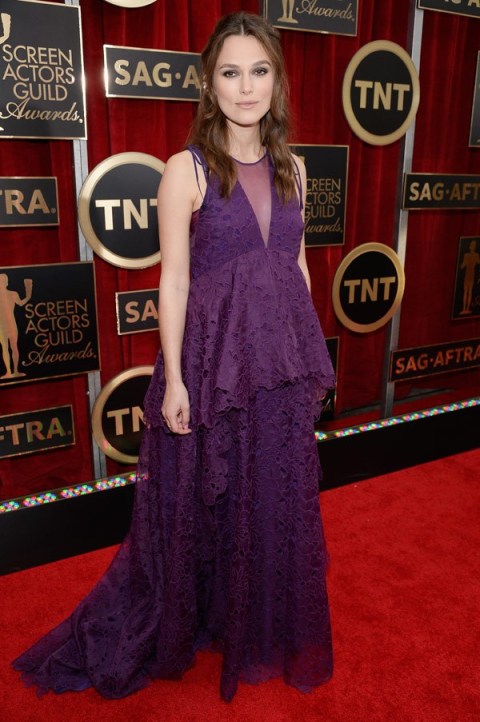 I’ve been hoping for an Erdem moment this season on Keira Knightley, but this isn’t what I had in mind.

While I do find the color absolutely delicious, (purple is my FAV) the fabric is an absolutely nightmare! Someone said on Twitter that it looks like she gave her baby bump curtains, and I second that notion. Curtains don’t have to be ugly, though! Curtains can be quite nice. This fabric is an insult to curtains and evening gowns everywhere!

I object to this because it’s not appropriate for the event. Also, I hate the shoes. The red lip? Love! 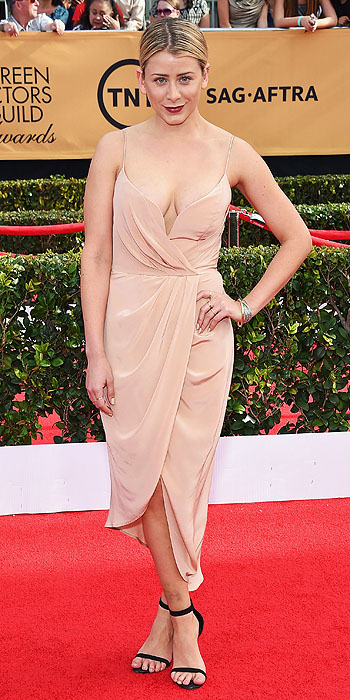 Lord knows why Lo Bosworth of the early 2000s’ Laguna Beach and The Hills was at the Screen ACTORS Guild Awards, but since she decided to make an appearance I thought she should be held liable for this droopy mess. This was SO bland. Then there’s the hair: roots, greasy, poorly styled. It’s probably the worst hair of the night.

Also, does anyone else spy that large bruise on Lo’s ankle? Given that its customary at the SAGs to wear a floor-length gown, I’m not sure why Lo chose to go cocktail length and leave that exposed. This list isn’t in any particular order, but if I had to pick a ‘Worst Dressed’ of the night…she’d take the cake. 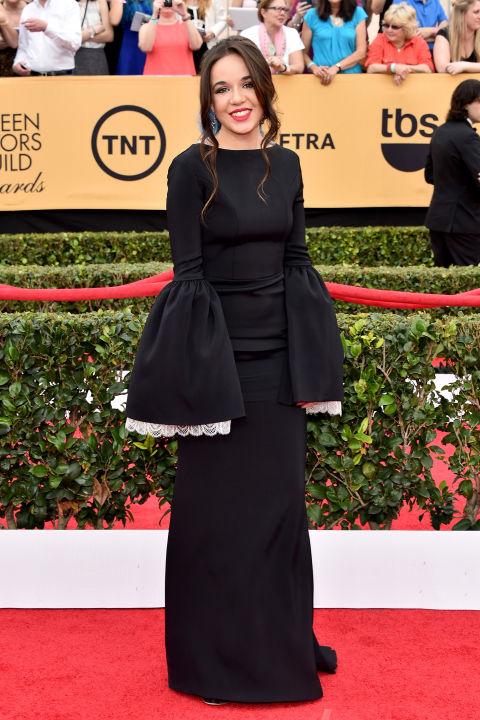 When Boyhood‘s Lorelai Linklater got word that bell-bottoms are back in style, she took note. Problem? Bell-bottoms are meant to be BOTTOMS Lorelai. As in…Not. Sleeves. 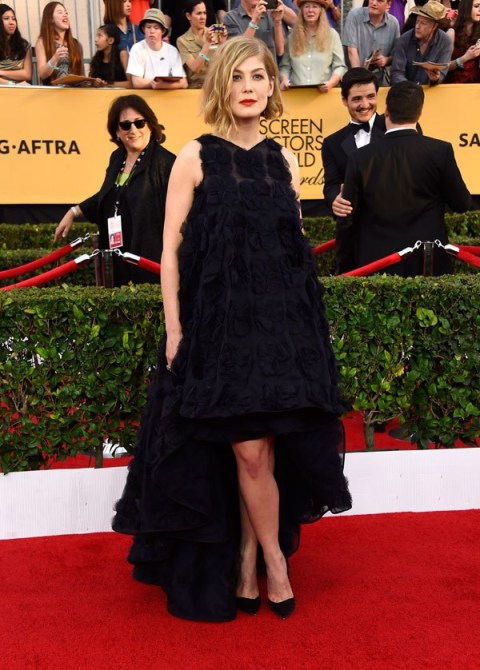 I do think the dress and the hair aren’t working well in conjunction with each other. This dress is screaming for sleek hair. Such as, Rosamund’s hair at the Golden Globes would’ve been perfect!  Then there’s the issue that, like with Julianna Margulies, the journey from Paris to LA turned an otherwise beautiful dress into a deflated balloon. #DeflateGate continues! 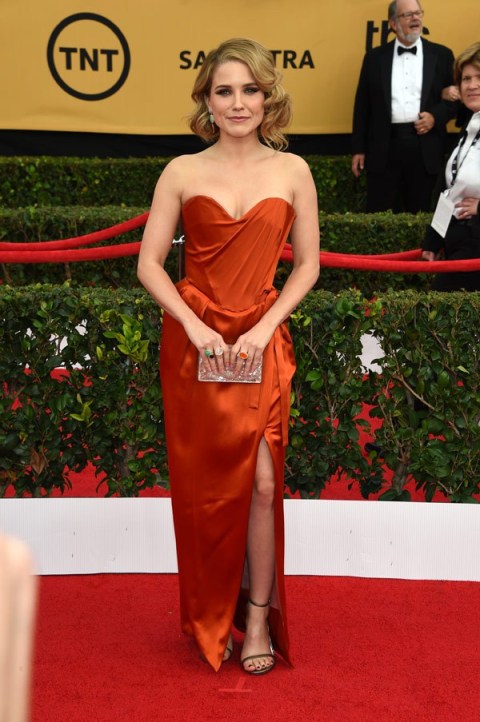 How did those boring shoes Julianna Margulies and Lo Bosworth were wearing somehow finding their way to Brooke Davis too? Were all the good shoes on strike this weekend in LA? Curious minds want to know!

As for the dress, like most things from Vivienne Westwood – I find the concept very beautiful, but the execution under par. 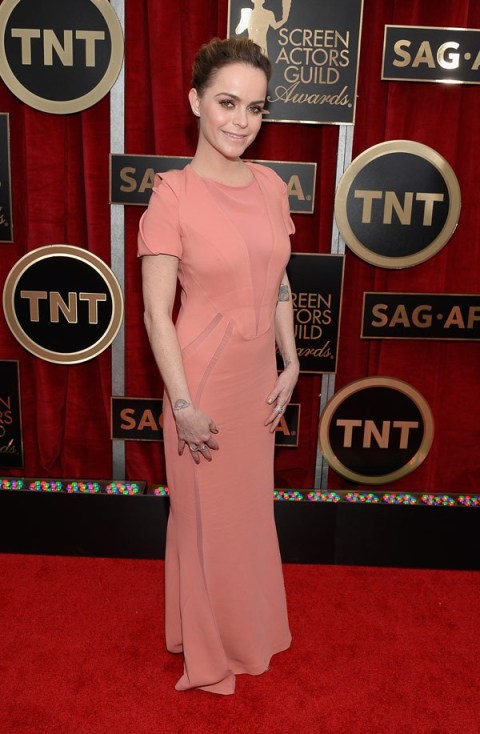 I feel bad including Taryn Manning on this list after watching her endure a very painful red carpet interview where Maria Menounos‘ most hitting question was: “Are you related to Peyton and Eli Manning?”

I mean, that should warrant her a bit of a free pass, right? I’ll be as nice as possible and say that this wasn’t good enough for her. Too old. Weird color. Too long. On a positive note, Taryn had good hair!

Overall, I’d say the biggest pitfalls for the 2015 SAG Awards worst dressed ladies were hair, shoes and the decent dresses plummeted during their commute.

In case you missed it, I did put together a 10 Best Dressed List which features some incredible stuff from Julianne Moore, Lupita Nyong’o, Emma Stone and more! So check that out.