Hollywood’s brightest stars took to the red carpet last night for the 2015 Screen Actors Guild Awards! It was a bit slow to start, but eventually the red carpet did fill up with big names like Julianne Moore wearing some stunning couture, all the ladies from Orange is the New Black (which won best ensemble cast in a comedy, btw) and of course Lupita Nyong’o being as dazzling as ever.

The SAG Awards have really stepped it up in terms of fashion in the last 5 years. It used to be a more casual red carpet, but these days – no one’s messing around. Glam to the max, the ladies of Hollywood really bring out the big guns for this special night when actors salute other actors on their general actor awesomeness. And, with haute couture to custom gowns aplenty, there’s basically no room for error – making the Best Dressed List feel like an episode of Celebrity Death Match! #Throwback #MTV

I did manage to narrow down my list to 10 Best Dressed Ladies of the night, including some obvious and not-so-obvious choices. Let’s get down to it! 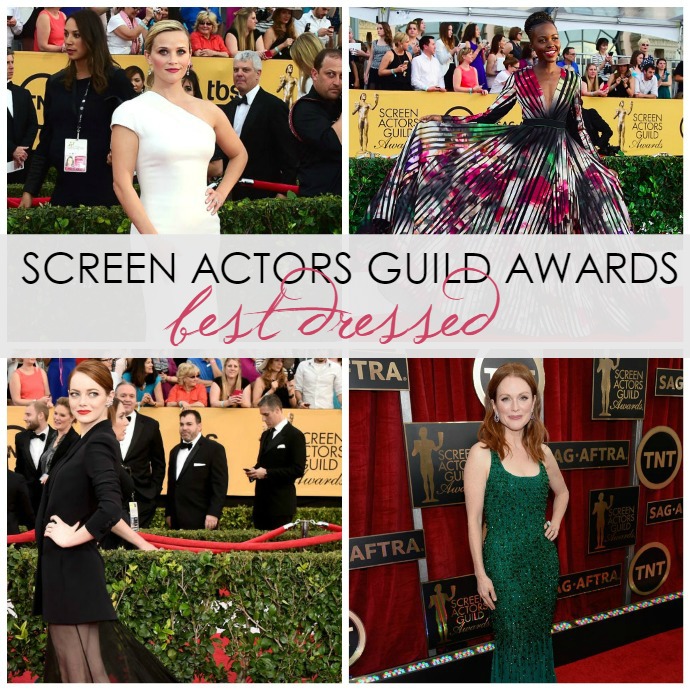 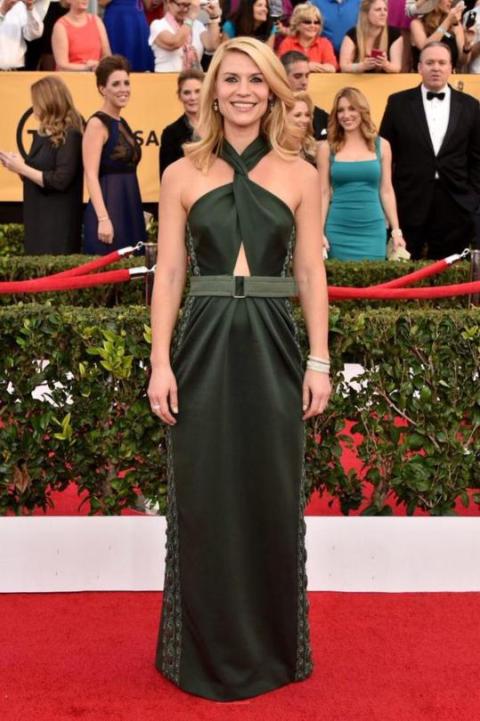 It could be that my recent binge rewatching of Homeland is skewing my perception, but I fully love and support Claire Danes and her avant garde choices. When Marc Jacobs threw out militant looks for Spring, I never expected to see one find its way onto a major red carpet. Leave it to Claire to go the unconventional route. I salute you Claire Danes/Carrie Mathison/Superwoman! I salute you. 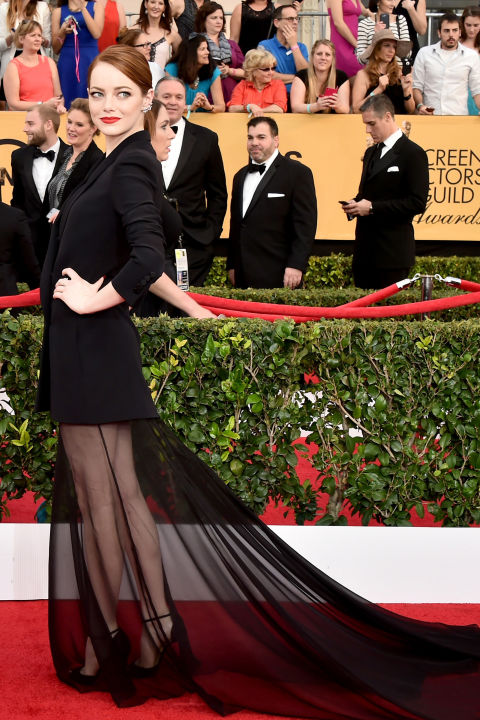 Yup, everyone’s favorite little darling Emma Stone did it again! Like Claire Danes, I LOVE that Emma brings variety to the red carpet and her love affair with menswear this season is seriously on-point. I think it’s the hair that seals the deal for me. She’s just spicier as a redhead – and capping that off with a red lip doesn’t hurt. I know so many fashionistas that I love/respect who hate this, but (while I value their opinion) I love this. It’s fun, young and supremely sexy! 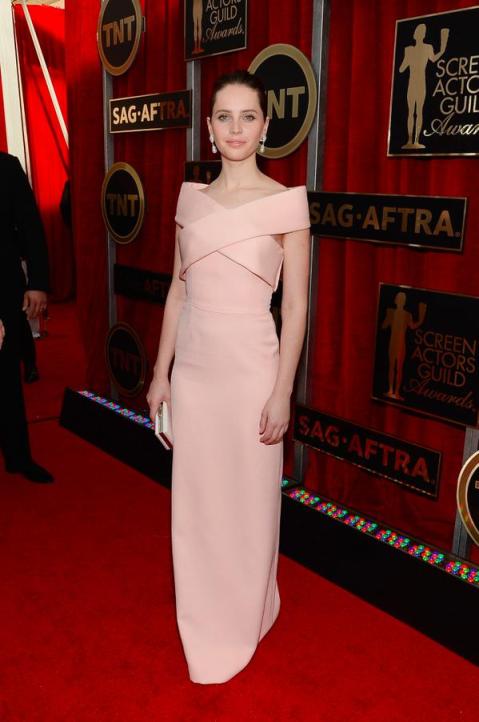 I thought this custom blush Balenciaga on Felicity Jones was gorgeously refined. In the day of cut-outs and sheer paneling, it’s refreshing to see a young actress commit to such an understated, elegant look. Some say this was too ‘safe’, but I found it timeless and lovely. Keep it up! 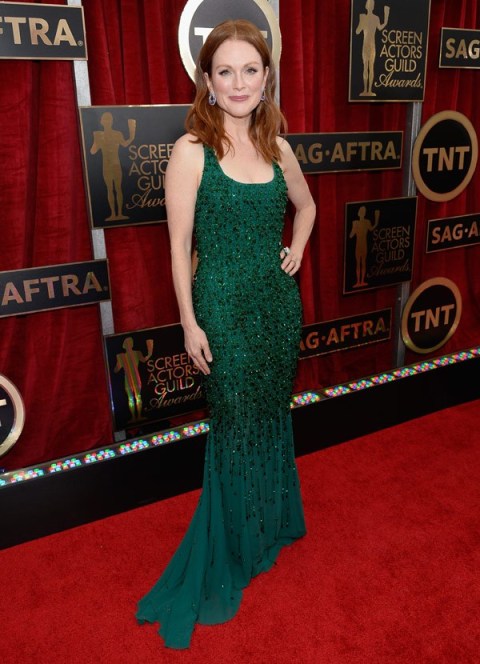 Is there anything more striking than a redhead in green? No. Obviously Riccardo Tisci knows this and Julianne Moore, certainly, does as well. It’s a scientific fact! Guys, I think Julianne Moore is on a mission. Seriously! Our girl’s been snubbed of Oscars before, but KNOWS this season is hers for the winning…and by golly she’s going to work every red carpet with conviction until that Gold statue is hers! Go for the gold Julianne. GO FOR IT! Have your moment! 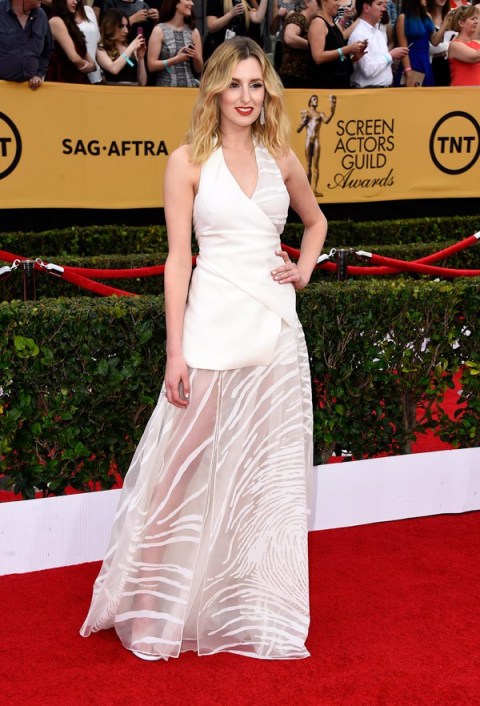 Told you, there are some surprising not-so-obvious choices on this list – and NO ONE is more surprised that I put Lady Edith in this sheer Vionnet on my Best Dressed than I am. Let it be said, that Lady Edith showed up at the SAG Awards in this BEFORE Emma Stone turned up in her Dior, which is basically the same concept but done in black. I mention this, because I know everyone’s going to talk about Emma’s Dior moment (rightly so), but I just want y’all to know that Lady Edith did it first! I don’t want Laura Carmichael to be robbed of her moment like her character Edith always is…so kudos to her. I love the menswear as evening wear trend and this Vionnet was a flirty, modern look that I love! 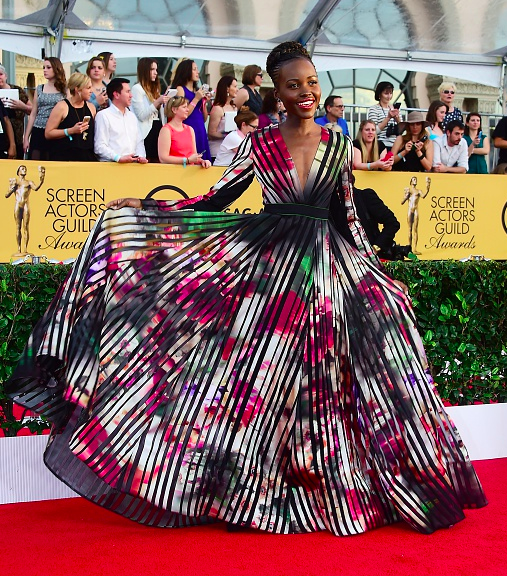 When this Pre-Fall 2015 Elie Saab debuted, I was curious how it would work on the red carpet and I am BEYOND excited that it landed in the hands of Miss Lupita Nyong’o because NO ONE could do it more justice. Honestly, I vote we always put her in full skirts. No one has more fun swishing around in a full skirt than Lupita! She’s so radiant and delightful in this that I can barely stand it. YES! 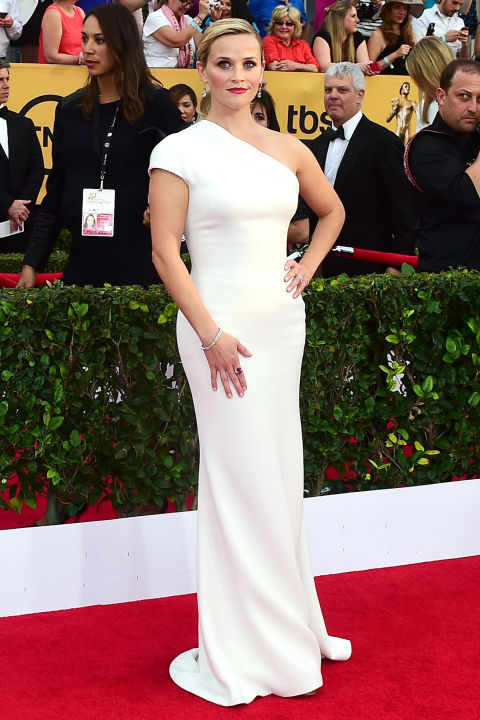 Following Lupita this basic white on Reese Witherspoon seems almost boring, but on its own it’s a seriously good look on her. I would say that yes, Reese generally is taking the safe-route this award season, but I’m a firm believer that you don’t have to make bold, ballsy choices to be a winner. Sometimes, slow and steady wins the race. Girl is winning! She looks poised, gorgeous and like a true movie star. 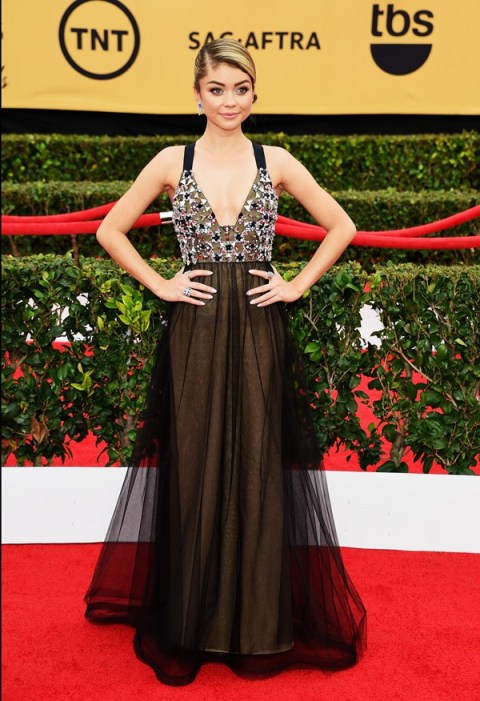 One surprise to me was just how much I LOVED Sarah Hyland! No, I’m not saying our friend from Modern Family usually disappoints, it’s just last night felt like a transformative moment for her. Vera Wang took Sarah’s style to new heights in this custom gown that’s appropriately youthful, while being quite the statement. Sarah shared on E! that she worked with Vera Wang on developing a dress inspired by Vera’s recent dark/gothy collections…but with some polish for the red carpet. I say, mission accomplished! I also say, this could be the emergence of a new style star. Keep it up, Sarah! 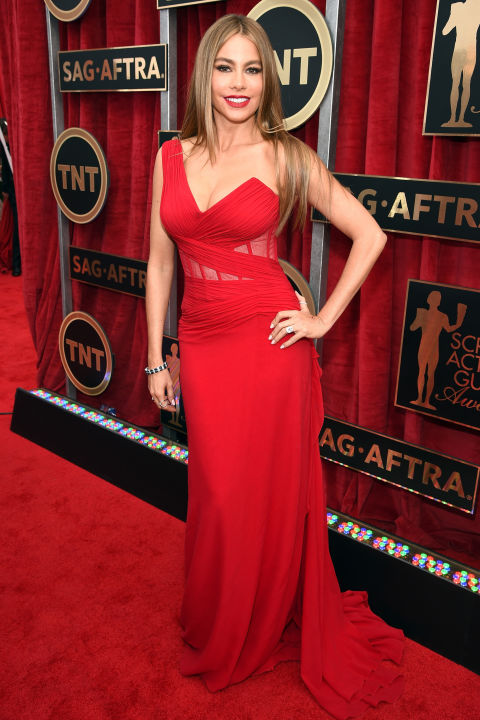 Perhaps the biggest shock of the night: Sofia Vergara found a dress that was NOT a fishtail! Sure, it was saucy and booby per usual – but the shape from the knees down was not a mermaid and that felt like a victory in itself. Pretty sure I’ve never included Sofia Veraga on a Best Dressed List, so let’s applaud everyone’s *current* favorite bride-to-be on her first appearance. Donna Karan Atelier is sort of killing it on the red carpet lately. Here’s to an American woman dominating! *cheers* 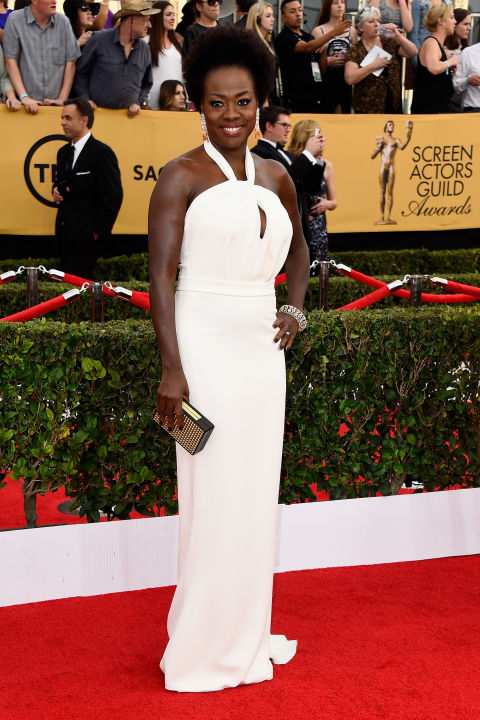 I quit How to Get Away with Murder after two episodes, but I was DELIGHTED to see Viola Davis take home the Best Actress award last night. She’s totally awesome, and while I find that show very flawed she is seriously good in it. Also good, her red carpet style and last night was another home run in my book. In crisp white, I thought she looked effortlessly bangin’. Yes, I said bangin’! It’s like Ricky Martin says, she looks like a flower but she stings like a bee! Not sure who her stylist is, but he/she continues to do right by Viola.

While I cut my Best Dressed List off at 10, there are loads of other fantastic looks you ought to take a look at! To make things easy on all of us, I put together an album of ALL last night’s red carpet looks. Click here to browse the album, which features other standouts like Emilia Clarke, Sarah Paulson, Julia Roberts and more!

Who is your pick for Best Dressed?