Hollywood hosted the 73rd annual Golden Globes awards Sunday evening, and the stars were out in full force! It was a colorful and diverse red carpet, that had both celebs and designers stepping out of their element. So, who are the 10 best dressed ladies of the night? 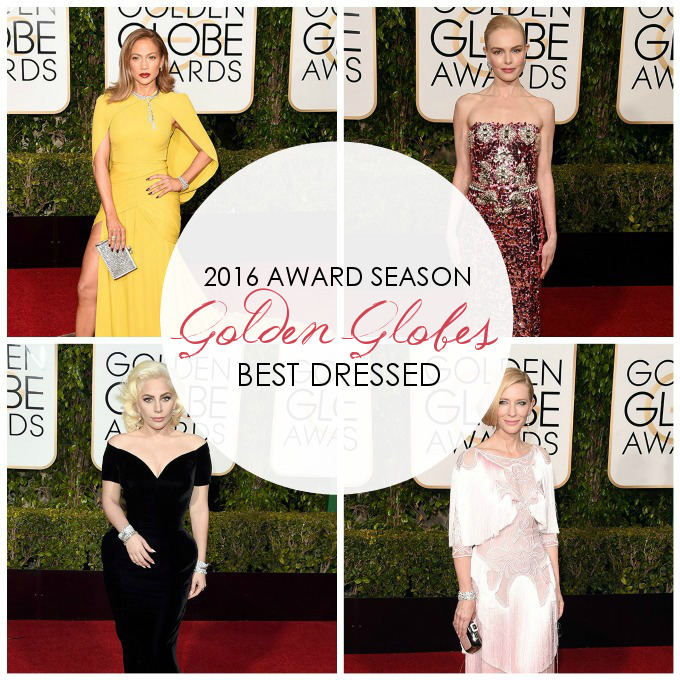 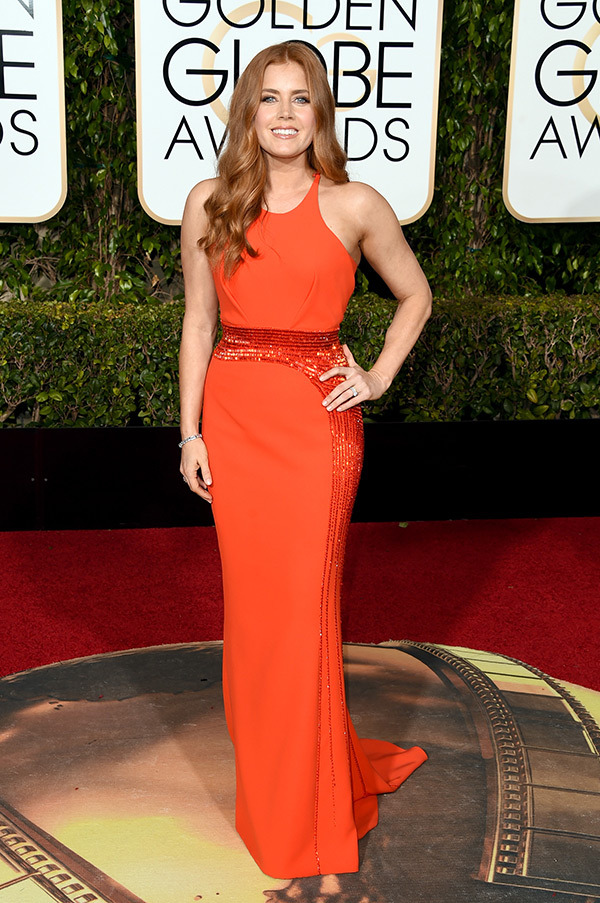 Amy Adams quite literally took my breath away when she appeared on television in this gorgeous Versace gown. Her hair color and the rich color of the dress are a striking combination – and very hard to miss! 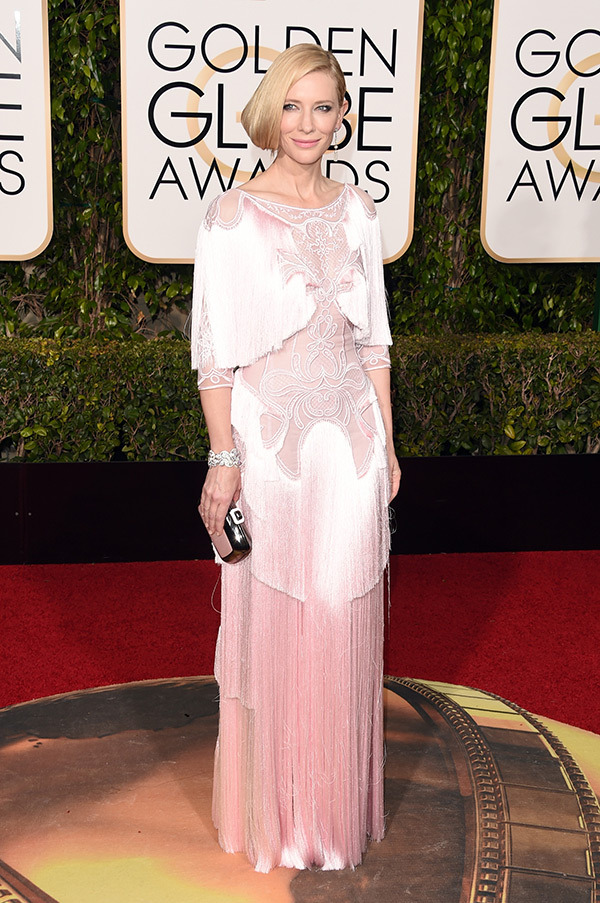 While not quite as wonderful as her costumes in Carol, the always fashion forward Cate Blanchett was a vision in this Givenchy couture gown. With intricate lace detailing and silky fringe, she looked like a true Hollywood legend. 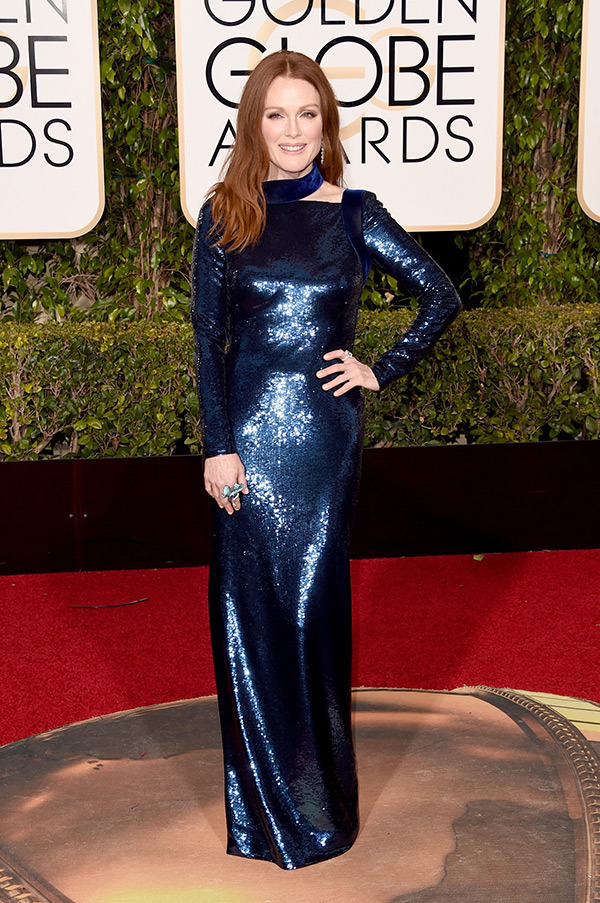 Julianne Moore partnered up with her longtime friend Tom Ford for this shimmering royal blue number. The gown on its own is lovely, but the velvet draped around her neck is the true blue cherry on top. 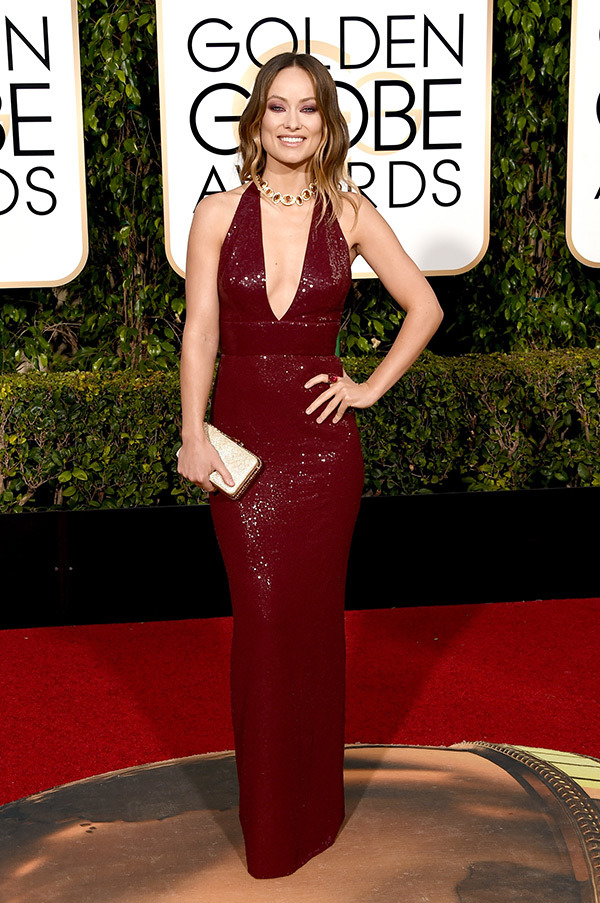 In sparkling oxblood, Olivia Wilde truly POPPED on the screen. Her relaxed hair and makeup give this a more effortless feel, but there’s no mistaking that dress fits her like a glove. Perfection! 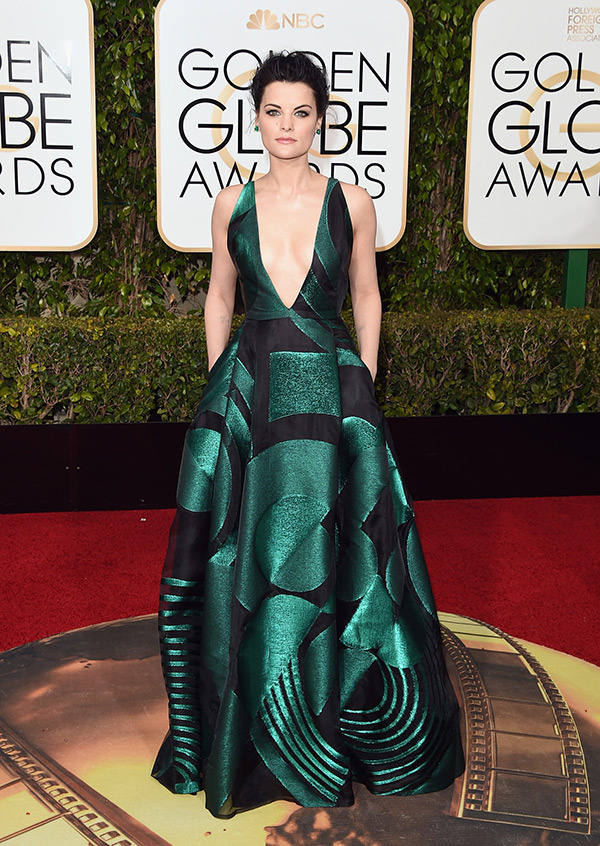 Jaimie Alexander stars in NBC’s hit Blindspot and is a striking beauty on the red carpet. After stealing the show at the Primetime Emmy’s in Armani Prive, Jaimie emerged at the Golden Globes in a less-known design that’s both elegant and modern. Perk? The gown has pockets! 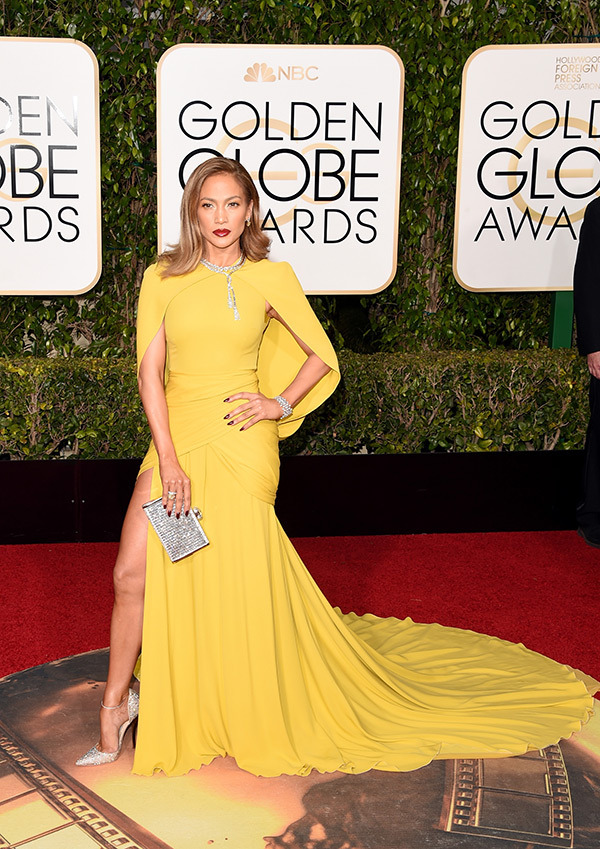 Jennifer Lopez broke her nude streak with this GORGEOUS marigold couture gown from Giambattista Valli. Last night, she showed up a true star of the red carpet…without having to flash a lot of skin for attention. Such a classic, romantic look that I think is honestly one of her best of all time. 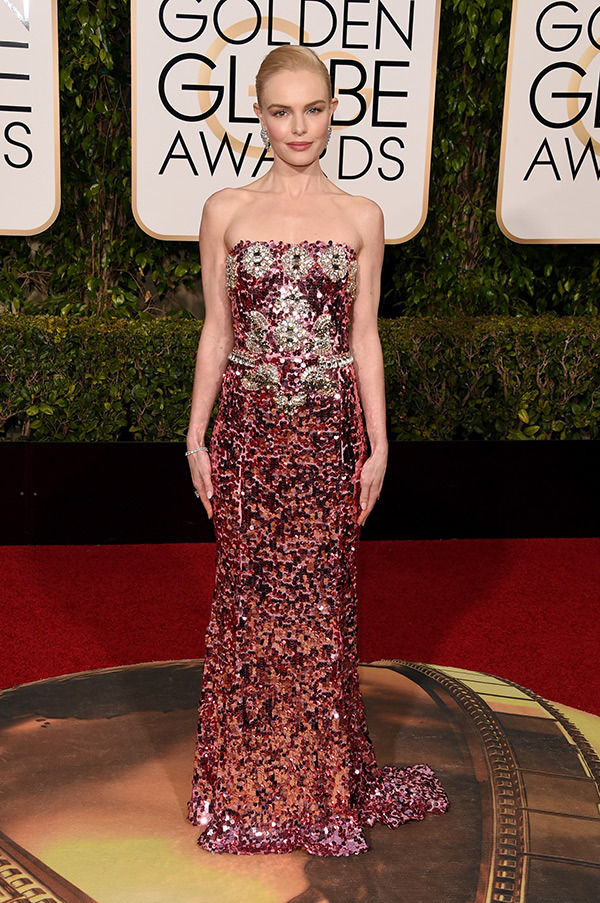 Kate Bosworth in Dolce and Gabbana

Dolce and Gabbana stepped outside of their own box to make this pink crystallized gown for Kate Bosworth. First spotted on Instagram, people were already abuzz before she took to the red carpet – but on camera, this was dazzling! Definitely my breakout look of the night, and perhaps one of DG’s strongest pieces in a long time. 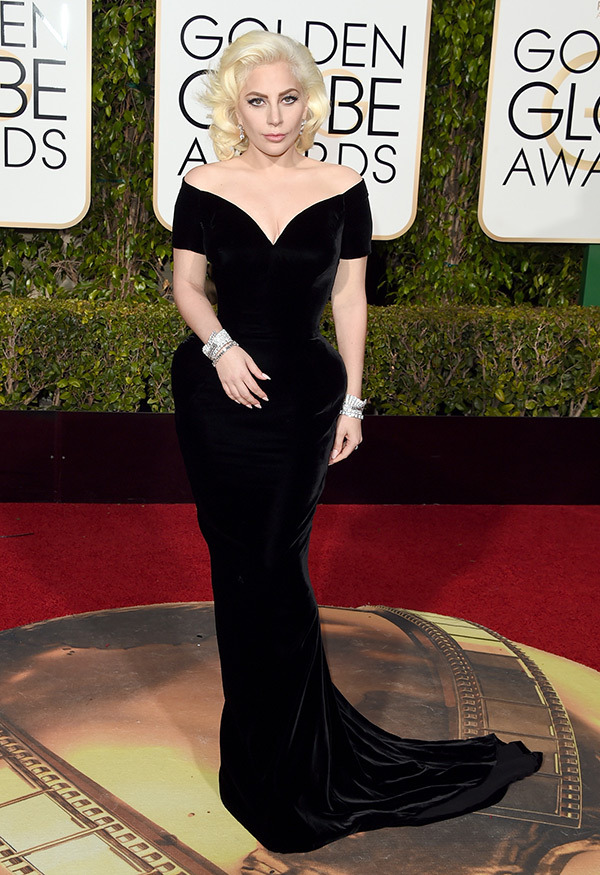 At first, I was going to leave this off the list as it is quite similar to Angelina Jolie’s Versace gown made famous when she *popped* her leg at the Academy Awards. Then, I thought…why? Why punish Gaga and this classic velvet gown simply because it’s not 100% original? Gaga was a regal bombshell, and I was thrilled to see her take home an award for her role on American Horror Story this season. 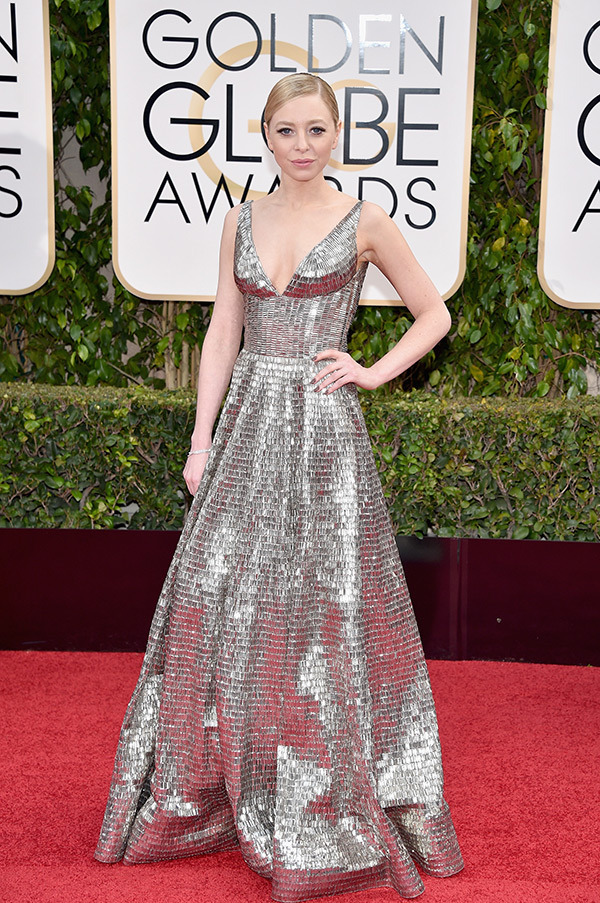 While Portia Doubleday may be new on the scene, there’s no denying the beauty of this shimmering silver gown. When it comes to winning my heart? Silver and sparkle will always go a very long way. 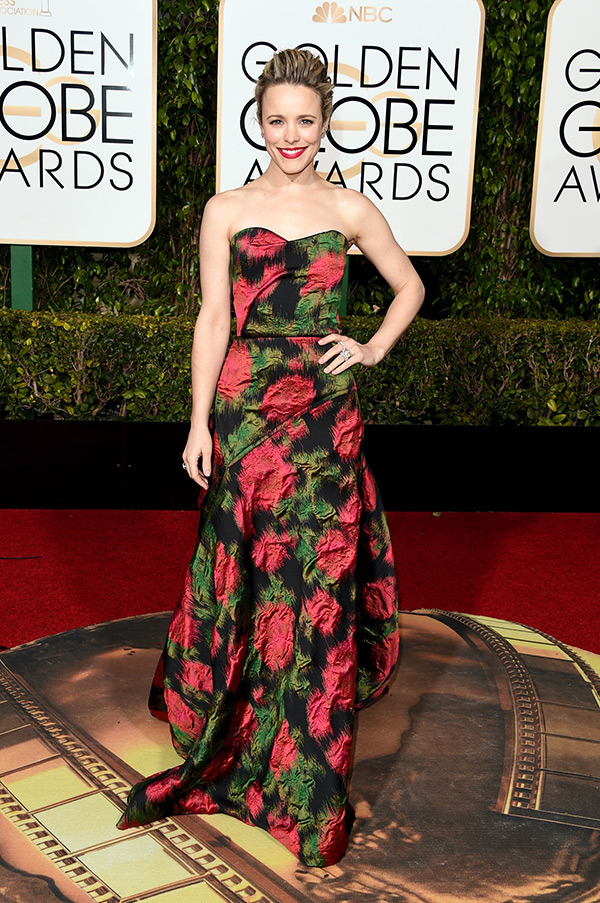 Talk about an unconventional dress for the Golden Globes. While people were undecided on Twitter, I have to salute Rachel McAdams for stepping outside the box and brazenly choosing a floral print. It’s a fashion risk that seriously paid off!

Those are my picks for the top 10 of the night, but I’m always eager to hear your favorites! Did we share any of the same? It was very tricky getting the list down to just 10, with so many stars bringing it on the red carpet this year. It bodes well for an exciting award season! Stay tuned, the Critic’s Choice Awards are next up!

In case you’ve missed it, I also shared my 10 Worst Dressed of the night here!

Click Here to see EVERY Red Carpet Look of the Night!

Previous:
Award Season 2016: Who to Watch!
Next:
10 Worst Dressed of the Golden Globes
Subscribe
Login

I did too. It just missed this top 10 list. Probably my favorite Dior on her yet. xoxo

Great picks!! I had SUCH a hard time narrowing my top 10 down… So many gorgeous looks!

All looking fabulous! But Kate Bosworth’s dress is an absolute winner x