Brother and sister duo Nicholas and Christopher Kunz opened NYFW this season with a collection fit for the huntress in us all, crediting inspiration from film noir, steampunk and (notably) castles. Remember when Dolce and Gabbana sent sparkling armor down the Fall 2014 runway? Well, the Kunz duo took a darker approach mixing distressed leather and industrial metal buckles with a color palette infused with rust, oxblood and gunmetal. No, this was not your everyday fairytale. 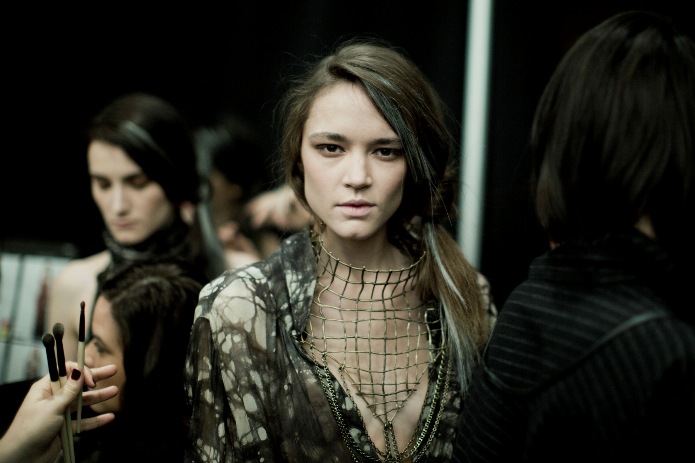 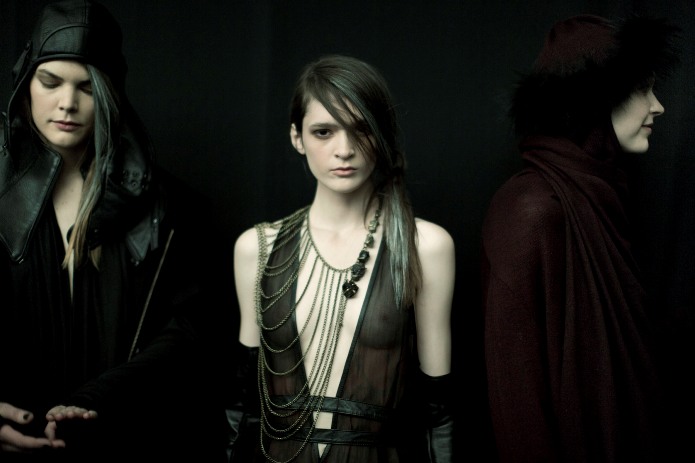 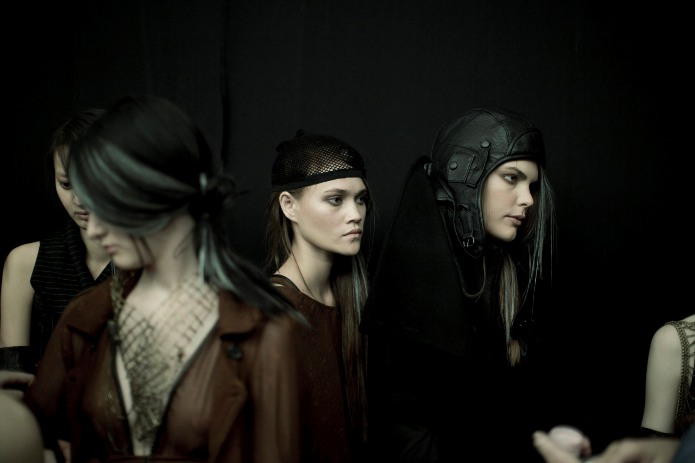 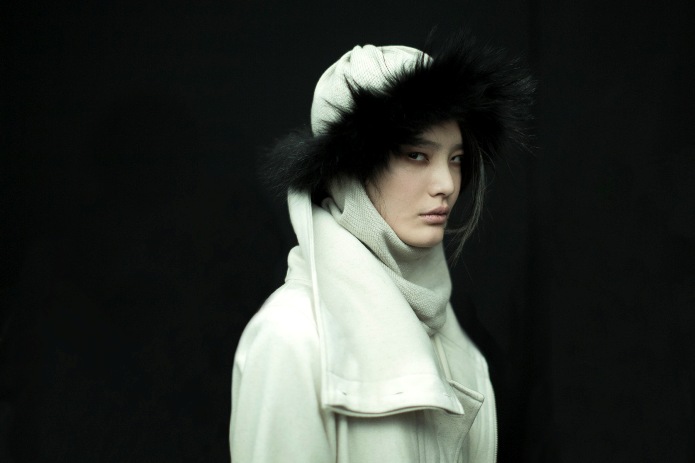 Backstage, models were prepped to look lethal with rugged makeup and textured hair worn in knots. The face was kept minimal and natural, with smudged brown eyes and naked lips. Models were accessorized with jewelry from Nicholas K, a collection aptly titled Huntress.

Make no mistake, you’re not the only one with visions of Katniss Everdeen floating through your head. The Nicholas K aesthetic caught the attention of the film franchise, which showcased pieces in the sophomore film Catching Fire. And if Kunz has anything to say about it: the Nicholas K girl is certainly primed for a fight-to-the-death in New York’s urban jungle. 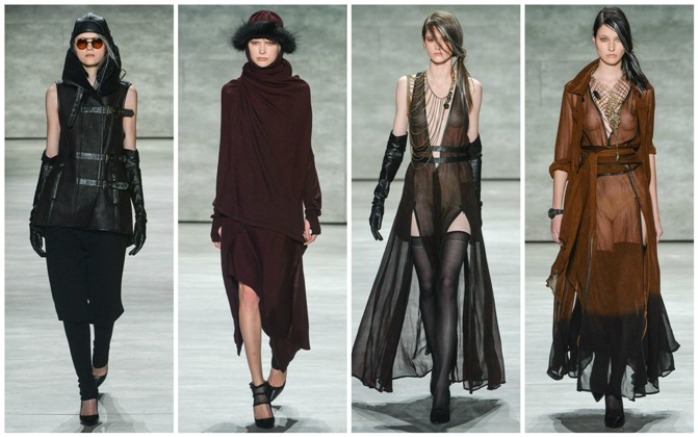 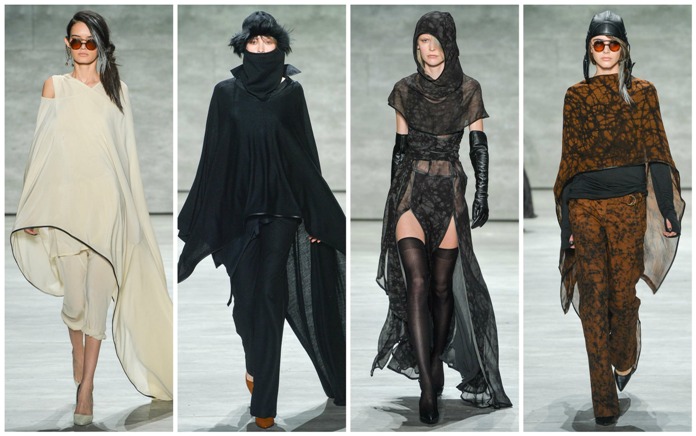 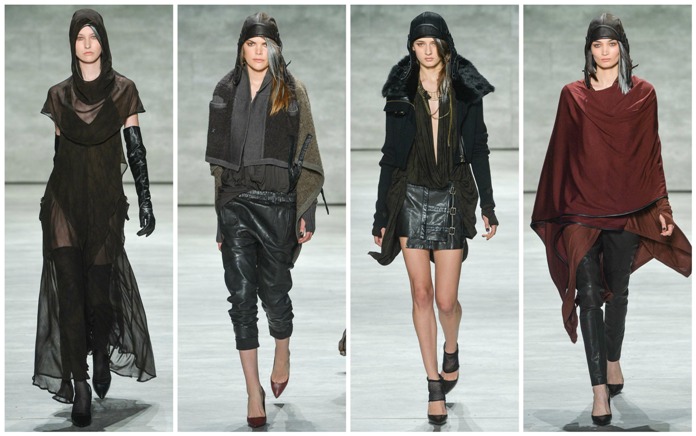 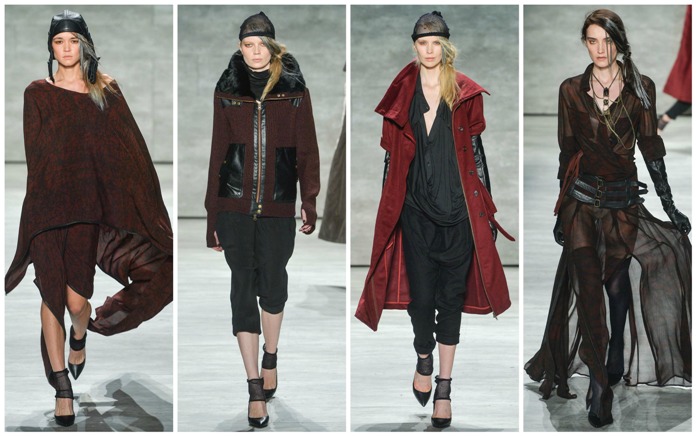 Movement was center stage as flowing tunics and maxi dresses made a prominent return for fall. Nicholas K showed sheer (hand-dyed) fabrics and drapery that moved beautifully on the runway, ‘cape-ing’ behind models as they walked. I know, we’ve seen A LOT of the ‘cape’ this season (thanks Lupita), but we are yet to see it shown quite this wispy. In a perfect balance, the soft movement nicely offset heavier textures of leather, wool and metal – making each look a pleasant mishmash for the senses.

And of course, we can’t escape the headgear. Say what you will about Nicholas K, but their headgear game is serious ON-point, all the time: 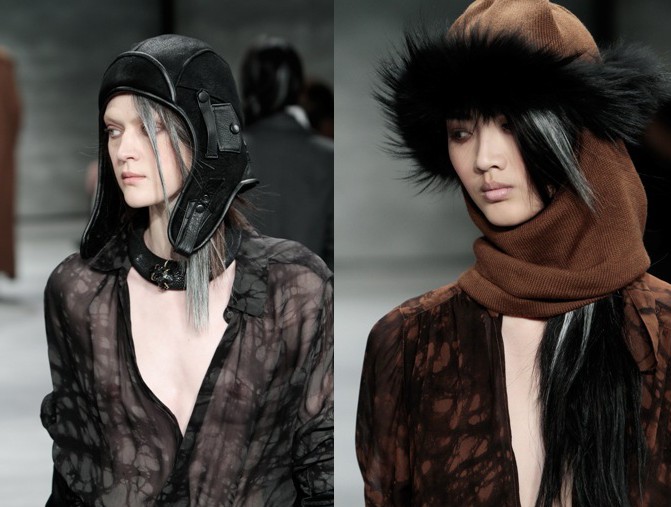 Nicholas K’s Fall/Winter 2015 collection was a real standout for me! The selling point? Seeing the clothes in motion. I highly suggest you check out the live runway show here to better appreciate the life of this darkly heroic collection.

And, of course, visit NicholasK.com for more genius from the Kunz masterminds.

What did you think of Nicholas K’s Fall 2015 Collection?