While we await the release of her new album Reputation – let’s discuss 10 MAJOR Taylor Swift girl power lessons we can all learn for ourselves. Prepare to feel empowered!

It took me a while to get on board the Taylor Swift train.

It wasn’t really till her Red era – because who can argue with the brilliance of All Too Well and turn against the catchiness of We are Never, Ever Getting Back Together?

I had several friends that were devout Taylor Swift fans for YEARS and I’d sort of cringe and say, yea yea…when they brought her up. Country music just wasn’t my thing and it did seem a little trite that her relationships always traveled from the pages of gossip mags to the lyrics of her songs.

Since Red though, my love and appreciation for Taylor Swift has grown in leaps and bounds. Sort of like the Grinch in The Grinch Stole Christmas when his heart grew – and grew – and grew. Her wit, knack for weaving an amazing rhyme and positive attitude won me over.

There’s a lot of drama, speculation and news surrounding Taylor Swift at any given moment – this week being no exception. After wiping her social media account, cryptically dropping short videos of a snake and then finally announcing a new single and album, Reputation, Taylor is no stranger to making headlines.

Sometimes, all the attention is pretty bad attention. I mean, people flooded her social media accounts last year with the snake emoji after she got caught up in more Kimye drama and her ex Calvin Harris took to Twitter calling her as such.

Being thrown under the bus on that scale hurts – even when you’re Taylor Swift – and it’s exciting to see her rise above for a comeback. Isn’t it? We all love a comeback!

Whether you’re a fan or not – I think there’s a lot we can all learn from Taylor Swift. She’s smart, talented and always one to rise above. Today, let’s reflect on the Taylor Swift girl power lessons that would serve us all to learn for ourselves.

Sure, we may not all be song-writers or major pop stars…but no matter who or where you are, all of us ladies can learn from the way Taylor Swift truly builds an empire out of all the rocks thrown at her. Millennial girl power, yes!

1. Never Let Anyone Undercut Your Success

“I want to say to all the young women out there….there are going to be people along the way who try to undercut your success, or take credit for your accomplishments or your fame. But if you just focus on the work and you don’t let those people sidetrack you – someday when you get where you’re going, you’ll look around and know that it was YOU and the people that love you who put you there. And THAT will be the greatest feeling in the world.” – Taylor Swift

I think every female knows what it’s like to have someone else take credit for her hard work and accomplishments. Their attempts to make you feel small – like you didn’t really achieve what you know you achieved.

At the 2016 Grammy Awards, Taylor Swift accepted the award for Best Album of the Year and spoke profound words that speak to that frustration. No matter how you feel about her drama with Kanye West, her strength to get up there and steadily speak those words is inspiring.

Don’t think there’s a single woman I know who has never been groped without permission. Thank you, Taylor Swift for standing your ground! pic.twitter.com/w5v7OW8Kez

2. Sexual Assault is Not Your Fault

Recently, a radio DJ that was photographed sexually assaulting Taylor Swift sued HER for damages because he lost his job over the ordeal. The suit went to trial, forcing Taylor to publicly recall the events in what I’m sure was a very difficult thing to do.

Rather than buckle to pressures from defense though, she stood her ground and refused to accept blame for the situation or the consequences said DJ faced afterwards from his employer. In the end, she rightly, won in court – a huge victory for women every where in my book.

“I am not going to allow you or your client to make me feel in any way that this is my fault, because it isn’t. I am being blamed for the unfortunate events of his life that are the product of his decisions, and not mine.”  – Taylor Swift

Haters are always going to hate, hate, hate…so when they do? Shake it off. It’s that simple. Don’t let the criticism and negativity of others ever get in your way. Shake it off, keep doing your thing and rise. 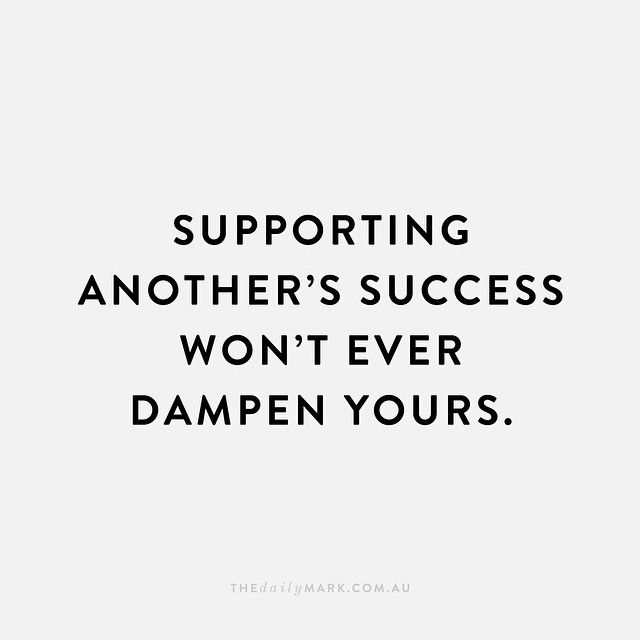 4. Celebrating the Success of Others Will Never Dampen Yours

While we can’t give Taylor Swift credit necessarily for this quote – we can certainly champion her for living by it. Taylor’s pretty famous at this point for having an A-list girl squad, including the likes of Selena Gomez, Lena Dunham, Gigi Hadid, Lorde and so on.

While we may not be privy to the intimate details of their friendships, we can all see the way Taylor supports and celebrate’s her friends’ achievements. She is genuinely as happy for their success as she is for her own. Here’s to strong females supporting their fellow strong females. 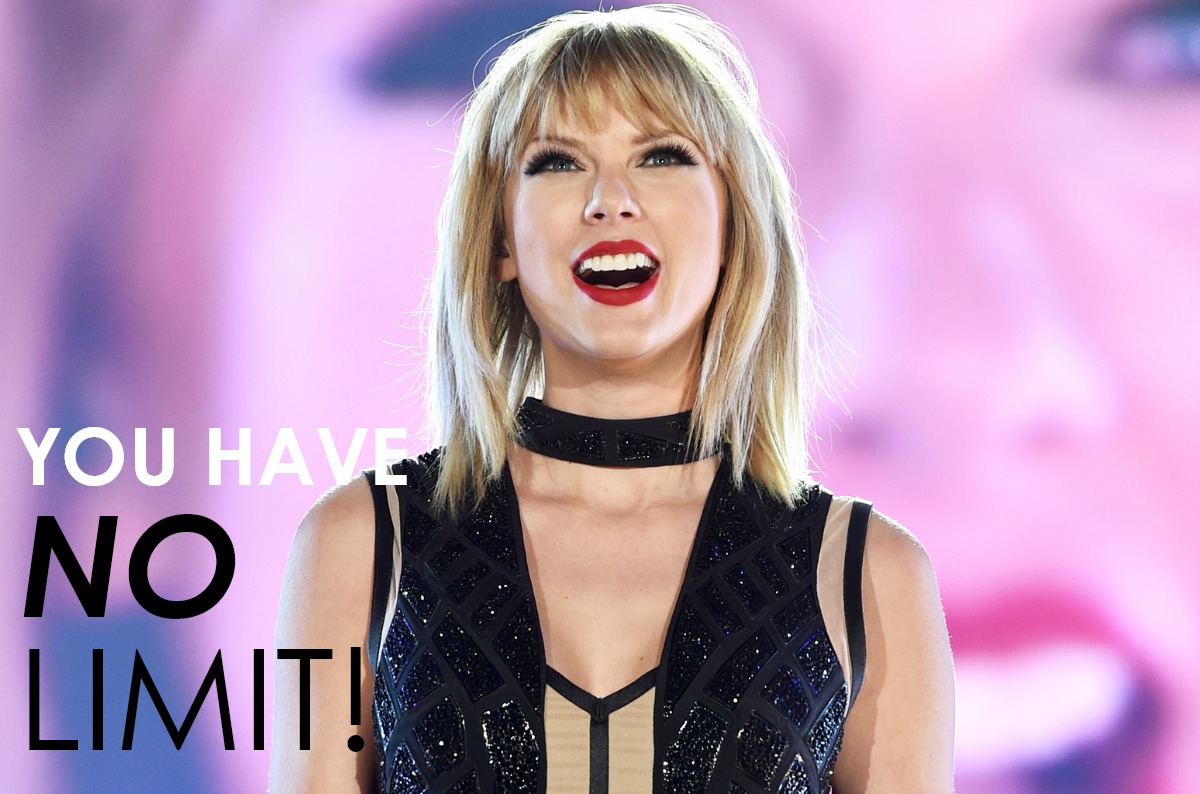 5. You Have No Limit – So Work Harder

Don’t be afraid of hard work and success. And, when you achieve success, let it fuel you to keep working harder and top yourself. There truly is no limit to what YOU can achieve.

“My attitude has always been if you get better and you see success, that should motivate you to even work harder, so that’s kinda how I approach everything.” – Taylor Swift 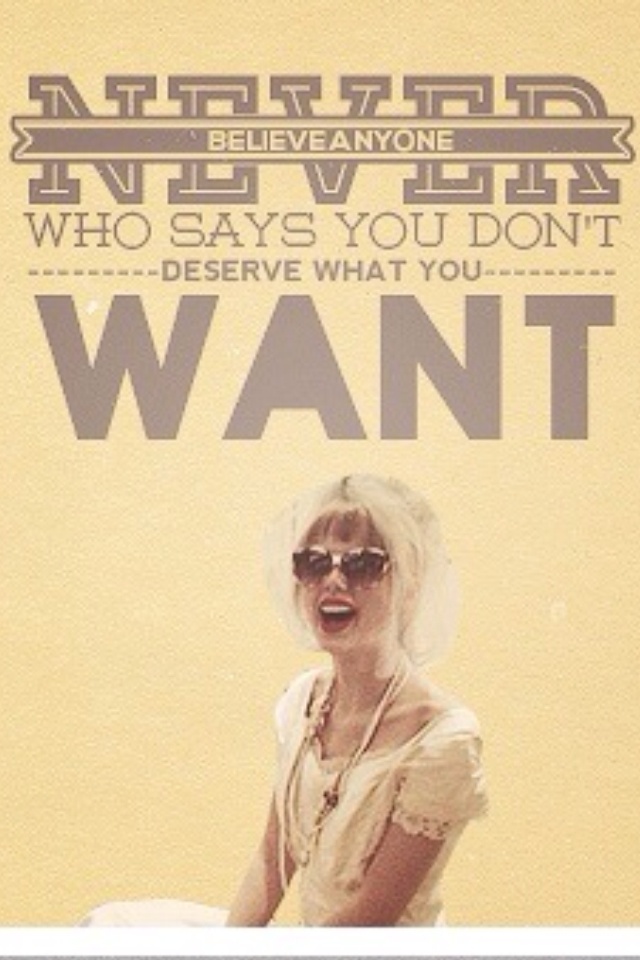 6. You Deserve What You Want

“Never believe anyone who says you don’t deserve what you want.” – Taylor Swift

While we all have dreams and ambitions, it can be disheartening when you haven’t yet achieved them. Like not passing your driving test the first time or not achieving where you want to be at your tennis lessons. But remember, just because you’re not at ‘end game’ yet…that doesn’t mean you’re a failure and that definitely doesn’t mean you haven’t made progress along the way. This goes for anything in life.

The road to success isn’t always perfect, but you’re not a failure just because you haven’t achieved it…yet.

“You’re not going nowhere just because you haven’t gotten where you want to go yet.” – Taylor Swift 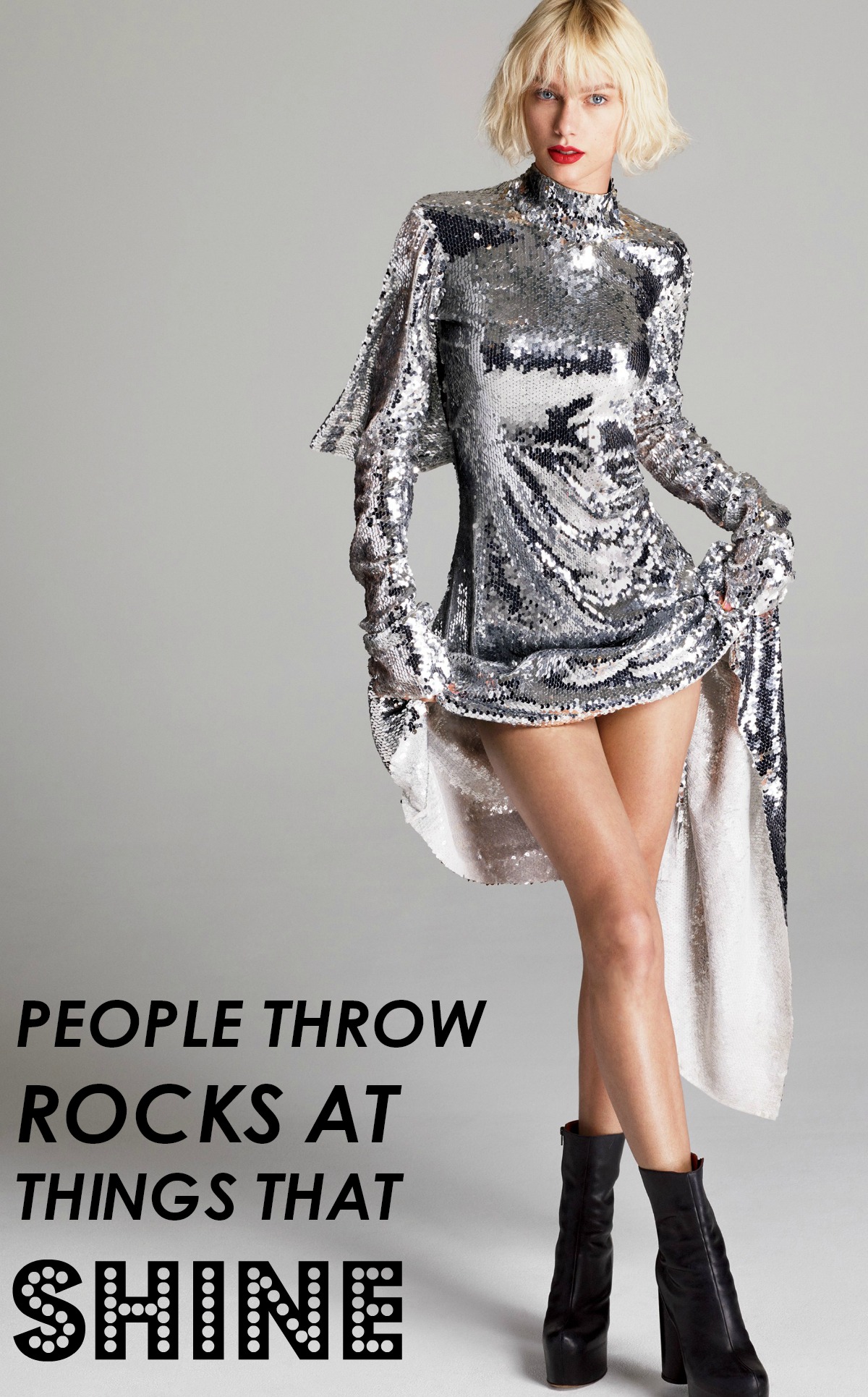 8. Ignore the Rocks While You Shine

When it comes to building an empire from the rocks that have been thrown at her, Taylor Swift is quite possibly the master. Time and time again she takes the punches, only to flip the script and come out on top. Taking the thousands of snake emojis/accusations that were thrown at her to stage viral social media buzz and another comeback? Just the latest in a long history of Taylor Swift coming out on top. 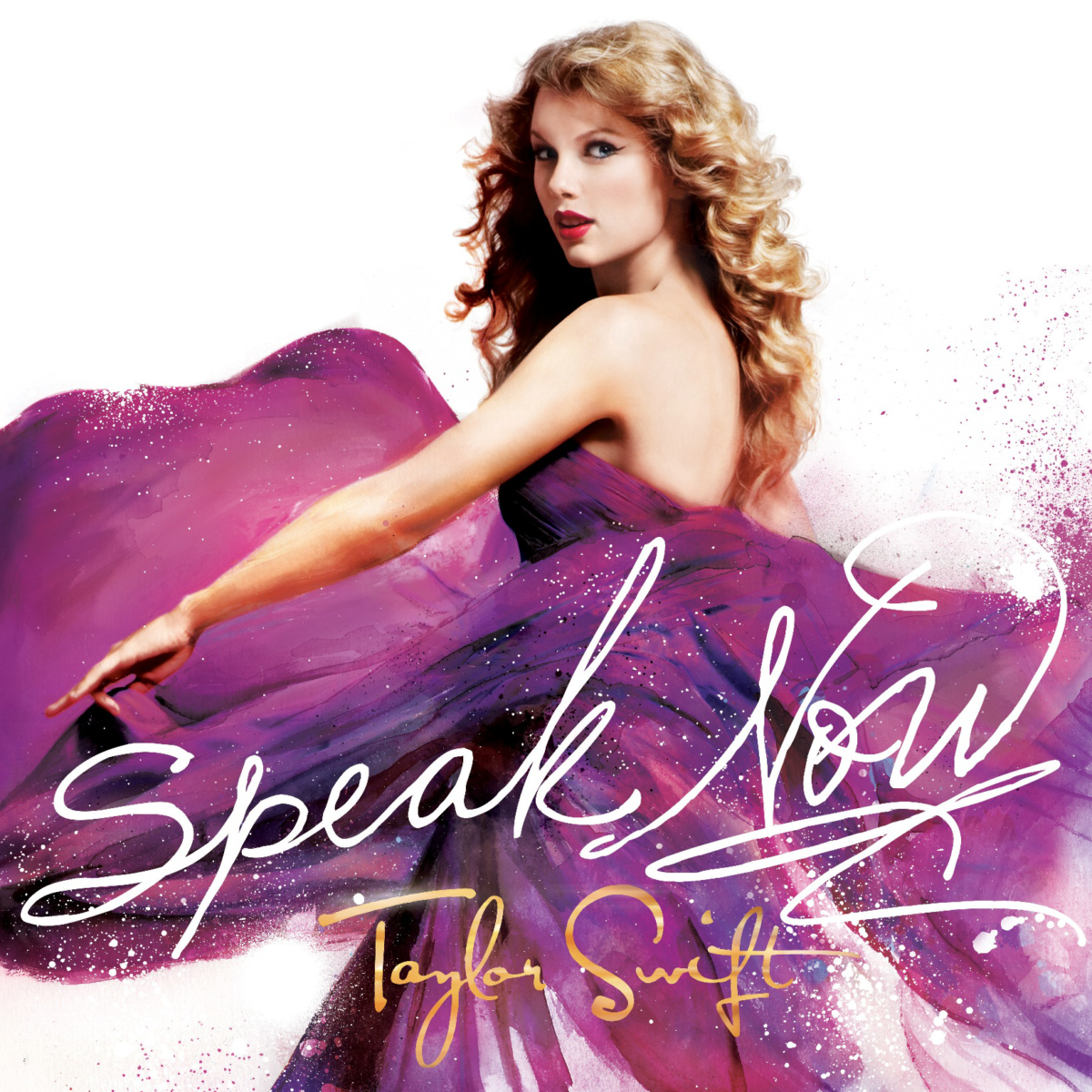 Be it against injustice, to defend yourself, to stand up against big corporations like Apple over the little man, to champion equality…or just for any reason at all, speak up. You have a voice. Don’t forget to use it.

“The words you stop yourself from saying are the ones that will haunt you the longest.” – Taylor Swift 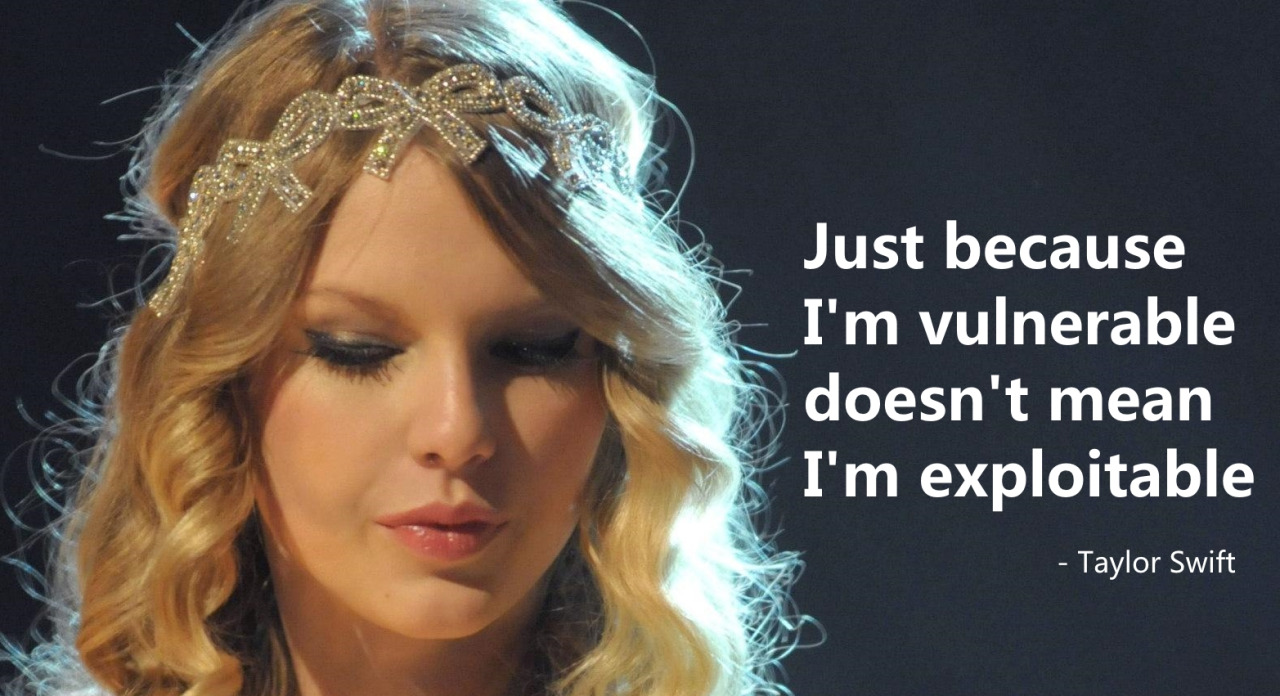 10. Vulnerability Does Not Equal Weakness

I feel like we’ve ALL (men and women) been raised to believe that strength means not crying, not getting hurt, not feeling loss. That any of the later depicts some level of weakness and that being vulnerable puts you in a position for others to walk all over you.

Through the years though, Taylor Swift has proven vulnerability does not equal weakness – in fact, your vulnerability can perhaps be your biggest strength.

Aren’t you feeling empowered? I hope so! I honestly had no idea I was going to delve into Taylor Swift girl power lessons today, but in putting this post together I realized just how inspiring Taylor really is.

Truly, always be yourself. Never doubt yourself. And, NEVER let anyone ever make you feel like you’re not good enough.

Now, I’m off to listen to 1989 for the umpteenth time and twiddle my thumbs till her new music is released…

The 2017 MTV VMA‘s are this weekend…meaning, I will of course be live-tweeting the spectacle and invite you to join me. This year’s show will be hosted by Katy Perry and promises performances from Katy (duh), Miley Cyrus, Lorde…and Taylor Swift herself is rumored to make an appearance. (And, with new music out just three days before…that seems very likely.)

Be sure to follow me on Twitter and join in the fun on Sunday at 7 pm EST! While basically no one watches MTV anymore, the VMAs are still good fun. Talk to you, Sunday!