2014 was a big year in fashion, on the runway and the red carpet. Designer fashion took a whole new – much sportier – approach and thanks to Moschino reached grocery store and Barbie aisle proportions. A new fashion starlet was born, Rhianna continued to wow-onlookers and Cate Blanchett remained perfect. Models returned to the cover of Vogue and Kardashian Kendall Jenner became the most hyped model on (and off) the runway. There was also a lot of turnover in big fashion names with departing creative directors at Louis Vuitton and Gucci, as well as the tragic loss of greats Oscar de la Renta and L’Wren Scott.

We had A LOT to buzz about in 2014! To honor such a fantastic year, I’ve put together my 10 Favorite Fashion Moments of the year, and invite you to do the same! 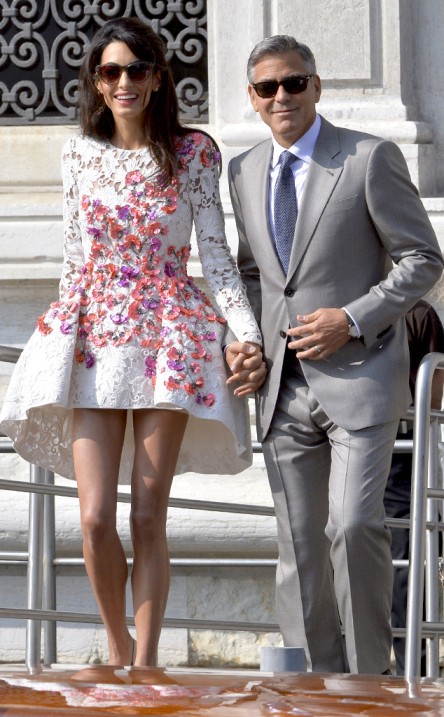 When everyone’s favorite bachelor George Clooney got married in 2014, the whole world took notice! His bride? An immediate fashion icon! Amal Clooney had many dazzling looks this year to WOW people everywhere, but my favorite? This stunning Spring 2015 Couture from Giambattista Valli, worn when Amal and husband Clooney greeted their adoring public in Italy after their picture-perfect wedding. It was a fashion moment straight out of the pages of Vogue, and I think we can all agree she stole the show. 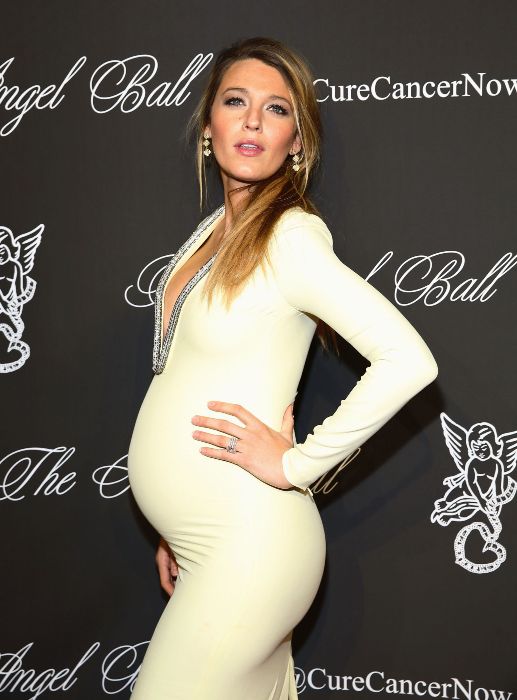 A Pregnant Blake Lively in Gucci

Leave it to Blake Lively to outdo Blake Lively herself. After rocking the red carpet of the Cannes Film Festival in dazzling Gucci and Chanel, Blake took the fashion world by storm AGAIN when she took to the red carpet sporting a very perfect baby bump. Blake’s pregnant fashion was a major hot topic this year, making women EVERYWHERE jealous – pregnant or not. Oh stop it Blake! It’s just not fair 😉 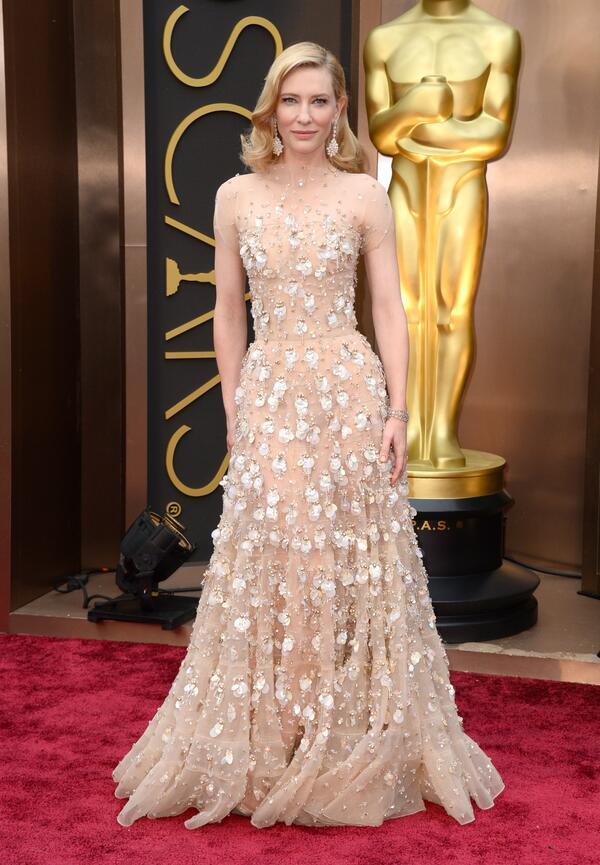 Cate Blanchett in Armani Prive Couture at the Academy Awards

When Cate Blanchett’s Oscar-winning performance in Blue Jasmine was making the rounds on the red carpet, I think we were all holding our breath to see just what she would wear. The stunner actress had gorgeous looks on red carpets EVERYWHERE, but my ultimate favorite is this champagne couture from Armani Prive worn to the Academy Awards- with detail so beautiful it makes me want to pass out. Blanchett’s got some big red carpets ahead of her this year, and I can only imagine what she’ll get up to next! Queen! 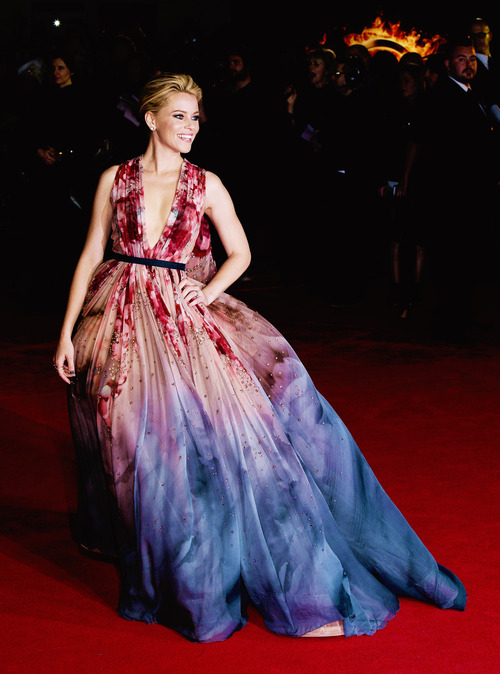 Elizabeth Banks in Elie Saab at Mockingjay Part I Premiere

In the novel Mockingjay, the character Effie Trinket is left behind in the Capital – but writers and producers did us all a favor when they brought her along to District 13 in the movie adaptation. Not only did Elizabeth Banks provide needed comic relief in the intense Blockbuster Mockingjay Part I, but she also stunned on the press tour! She was a true vision on the red carpet of Mockingjay‘s World Premiere and truly WORKED that gorgeous Elie Saab couture. This is what fashion moments are about! 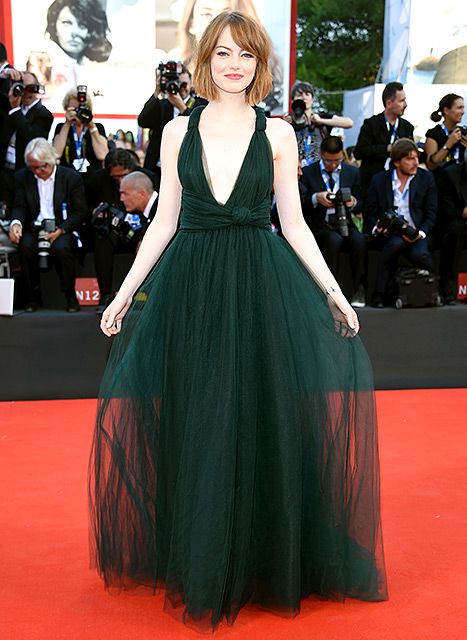 Emma Stone in Valentino at the Venice Film Festival

Emma Stone is always a must-watch on the red carpet and she had a collection of killer looks in 2014. My ultimate favorite was this romantic evergreen gown from Valentino. Is there anything better than a redhead in green? How nicely it compliments her hair and skin tone. 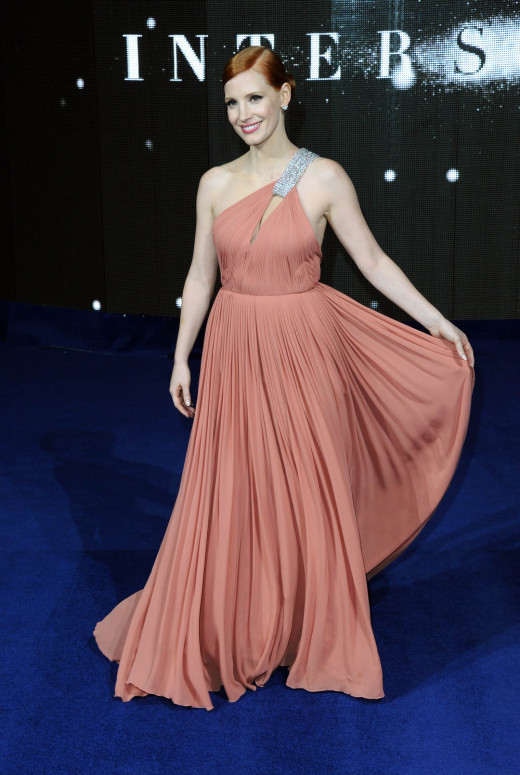 Interstellar MAY be one of the most confusing movies I’ve ever seen, but Jessica Chastain was definitely very good in it. Never one to turn down a big fashion opportunity, Chastain wore a number of fantastic looks while promoting the film. The best of the best? This blush pink Saint Laurent number. Jessica looked relaxed and comfortable on the red carpet, in what is maybe a personal best? I love how she carried and twirled this romantic beauty. 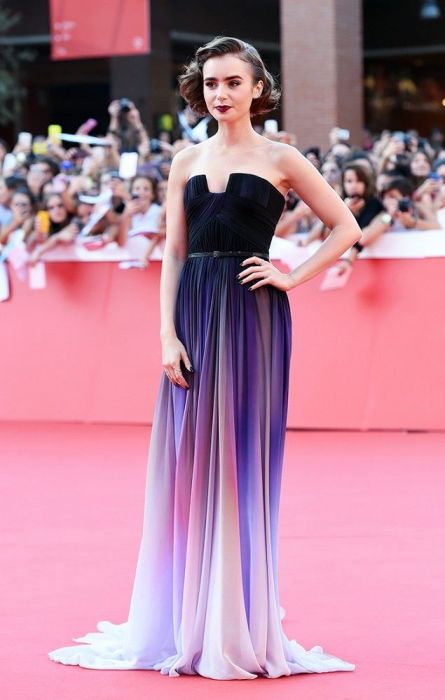 When Lily Collins graced the red carpet of the Rome Film Festival, everyone took notice. Lily was my pick for ultimate Girl Crush in 2013, but in 2014 she stayed a bit off the radar. That is until she adorned herself in exquisite Elie Saab and demanded all of our attention at a Love, Rosie premiere. With perfectly dramatic matching makeup and a noticeable lack of accessories, it was a look so pulled together you couldn’t help but fall in Love with Lily! 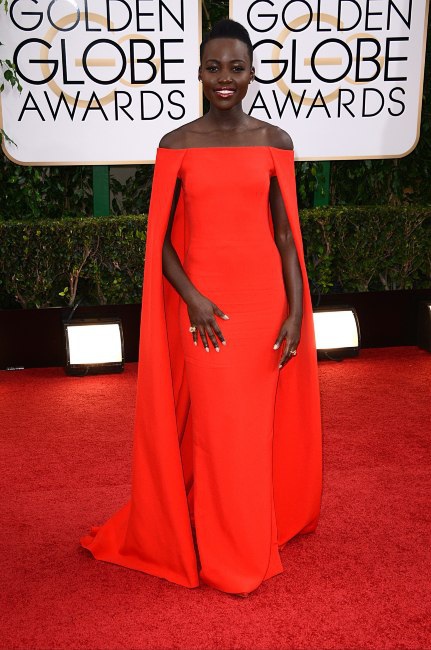 It was on the 2014 Golden Globes’ red carpet that a new fashion star was born, her name? Lupita Nyong’o. There were so many great fashion moments for Lupita in 2014, but none resonated quite so boldly as this moment – and yes, a MOMENT it was! Lupita wore a red caped Ralph Lauren gown, straight off the runway, turning head everywhere. It was a moment so monumental, fellow nominee Amy Adams had to drop the cape of her own red number as a show of respect to Lupita’s big look. Today Lupita’s absolutely one of Hollywood’s brightest stars, and this is the moment where it all began! 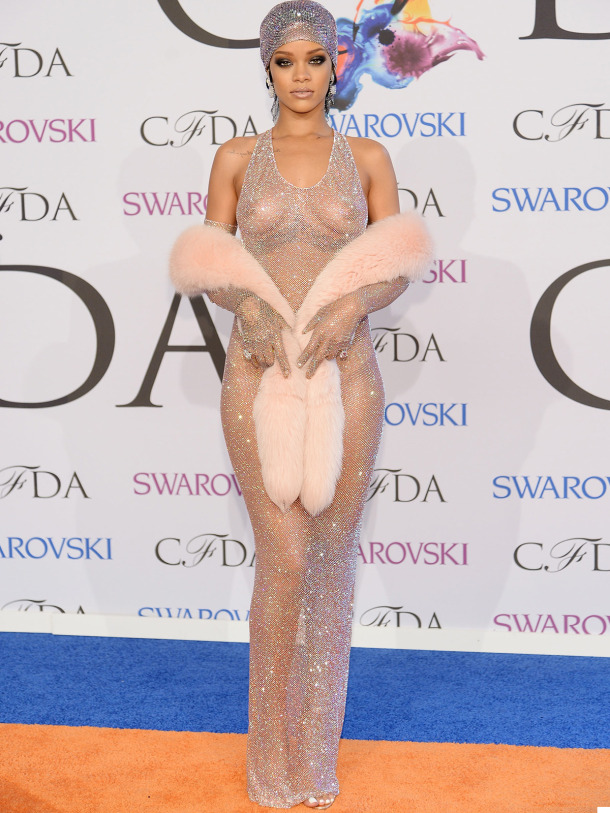 Named Style Icon of the Year, Rhianna took to her big moment at the 2014 CFDA Awards in this glistening, crystal custom Adam Selman gown. It was a beautiful nearly-naked moment that had people everywhere talking. Leave it to Rhianna to cause a scene! Whether you loved it or hated it, there’s no doubt this polarizing fashion choice was one of the biggest moments of the year. 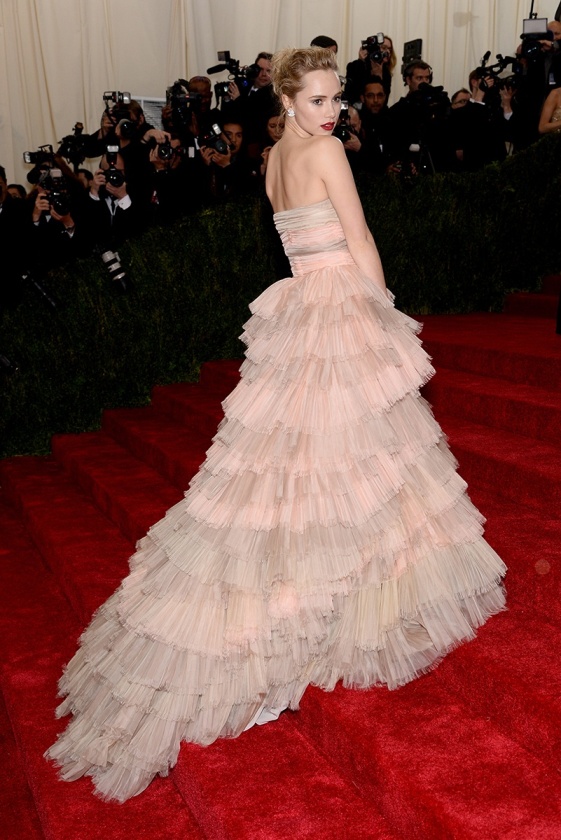 Suki Waterhouse Took to the Met Gala in Burberry

The Met Gala is arguably the biggest night in fashion each year, with every big name in fashion and celebrity taking to the red carpet in their finest! So, it’s no surprise when there are several fantastic fashion moments happening on the same night, but none took the cake for me quite so much as this custom Burberry on model Suki Waterhouse. Like many fashion moments today, we got our first glimpse of Suki on Instagram – but it really came to life when she took the famous red carpet staircase. Suki and Burberry have shared many great moments together in 2014, from a gorgeous ad campaign with Cara DeLevingne – to opening and closing their show at London Fashion Week. But it was at the MET Gala in May where they really stole the show!

There are some beautiful dresses in this post, I especially love the cute little dress that Amal is wearing. Isn’t she a beauty?! Rihanna also caused some stir wearing that nude sparkling gown, she must have some body confidence!

Ahh I never saw that dress on Amal!! I’m obsessed with her style, and just her in general haha. That dress is gorgeous! Lupita’s Ralph Lauren dress was one of my favorite moments of the year. I still want a dress like that! Great post 🙂

Amal is my new favorite thing! I’m hoping George Clooney goes to the Oscars so she can come haha