With the spookiest day of the year just days away, these Netflix Halloween Picks will definitely get you in the mood. Get your popcorn ready! 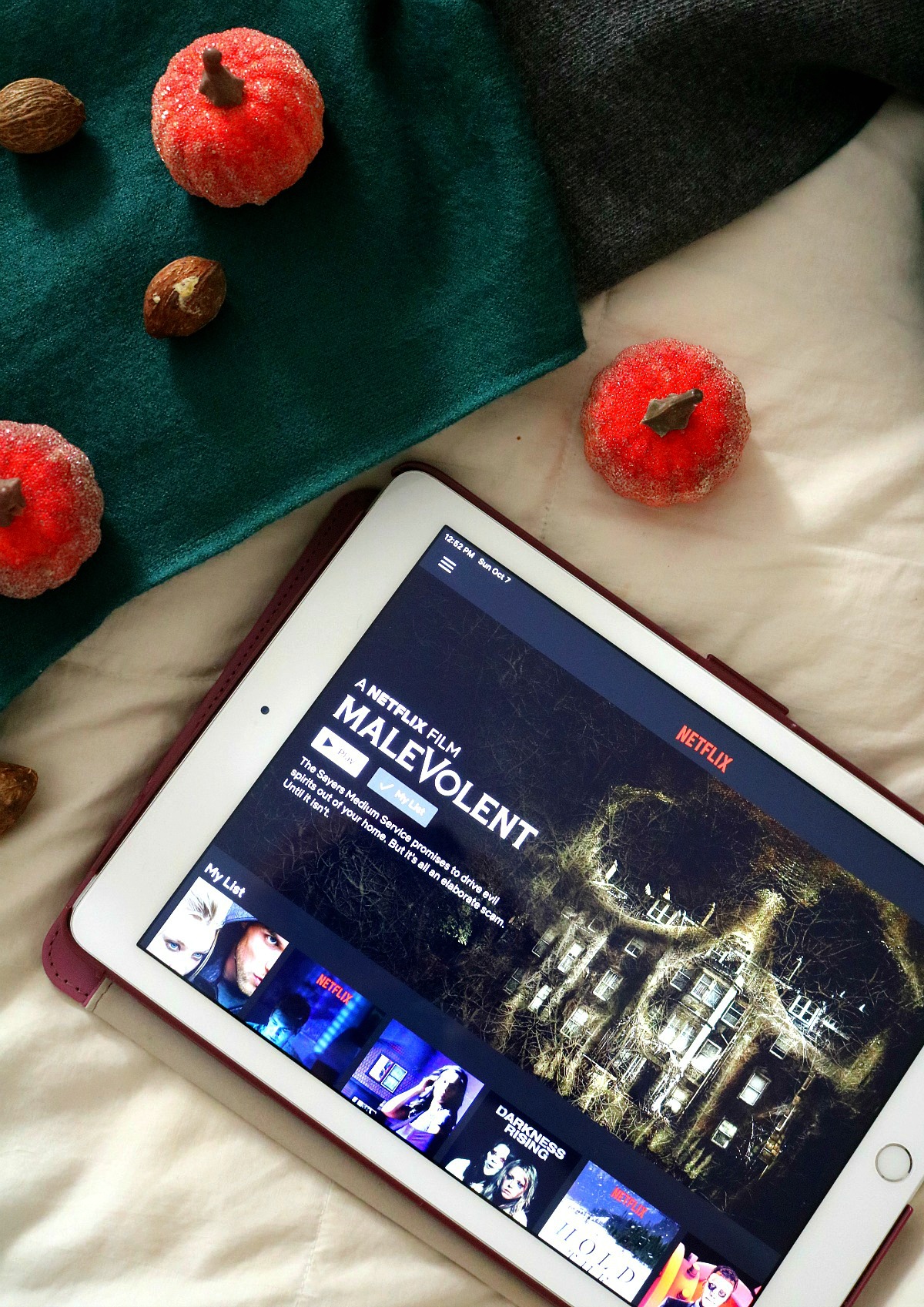 While Christmas is no doubt my favorite time of the year, Halloween is a CLOSE second.

And not just because I’m guaranteed to love any holiday centered around candy, although that doesn’t hurt. From a young age, I’ve had a love of all things spooky and every October I devote the entire month to catching as many scary movies as I can. (Of course come November 1 it’s full-speed ahead to Christmas.)

Looking back in the Dream in Lace archives, I was shocked to discover that I haven’t rounded up a list of Netflix Halloween picks for your since 2016. Given how routinely I tune into scary movies, I felt I had to immediately rectify the situation by sharing some of my top recommendations.

Whether you’re on the hunt for something super scary – or something more light-hearted – I wager this list includes something that will strike you fancy.

And given my familiarity with the “Horror” selection on Netflix at any given moment, I figured I might as well use my expertise to provide you with a little direction. (Because I certainly have watched more than my share of *duds* on Netflix and wouldn’t want you to waste your time.)

So get your Netflix app out because these are the Halloween picks you’re going to want to *add* to your list! 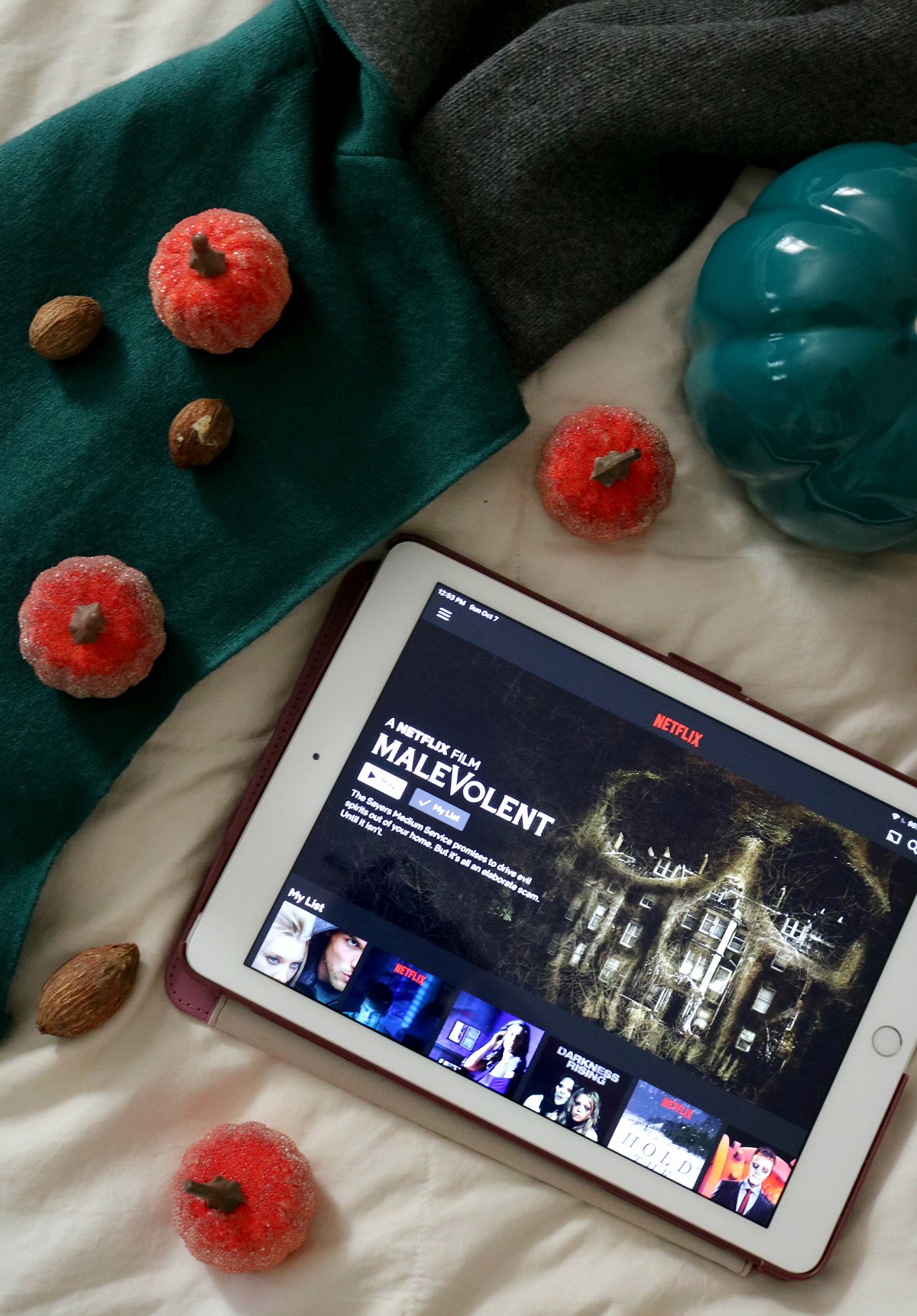 As a rabid fan of horror films, it’s VERY rare that a movie creeps me out. But to this day I vividly remember seeing this in a movie theater with my friend and wanting to run to my car and lock the doors as quickly as I could when it ended. The Strangers follows a young couple who are staying in a remote cabin after attending a friend’s wedding. In the middle of the night a strange young girl comes knocking on the door and from there things get crazy.

I feel like ghost story flicks are pretty rare these days, so when Malevolent hit Netflix I was excited to check it out. A brother and sister who run a business swindling unsuspecting customers with their efforts to fight the paranormal stumble on a case where they encounter real ghost activity. The fake ghost-hunter premise itself I don’t think was all that original but the film’s atmosphere and slow-burning plot comes to a great conclusion.

I confess, I only checked out this film because of William Moseley (who I love from The Royals). But, in the end, Friend Request was entertaining enough to land a spot on my Netflix Halloween picks for the year. The movie follows a popular college student named Laura who feels sorry for a loner classmate named Marina. In an effort to be nice, she accepts a friend request from Marina and soon after starts to see a darker side of her emerge. This one might make you think twice before friending someone you barely know on Facebook – and comes together with an ending that will stick in your mind for days.

The Haunting of Hill House (2018; McKenna Grace and Carla Cugino)

This one I haven’t actually seen yet but I read the book a while back and have been eagerly awaiting its release on Netflix! The 10-episode series flashes between both past and present as a family confronts haunting memories of their old home and the terror that led them to move away from it in the first place. Really excited to watch this one play out!

While I stumbled upon the film Hush on a random summer night, it earns itself a spot on my list of Netflix Halloween picks because of how well the story develops. While I’d technically classify this as more of a ‘suspense’ film than horror, it stands a good chance at making your skin crawl. A deaf writer is stowed up at a cabin in the woods minding her own business when a masked killer appears at her window. From there a cat and mouse game ensues that will have you on the edge of your seat.

Before I Wake (2016; Kate Bosworth and Thomas Jane)

I’ll pretty much watch anything Kate Bosworth is in because she has a knack for finding unique scripts. In the film Before I Wake, she and her husband are grieving the loss of their son when they welcome a new foster child into their lives. As he gets situated to life in their family, the couple discover that he has some unique abilities – including a strange connection to their lost child. This one has a bit of a creepy factor to it, without being overly scary. So if you’re looking for an eery story that won’t scare you too much, this is a good pick!

When two teen boys come up with the idea to prank their cranky old neighbor into believing his house is haunted, they set up surveillance to watch their trick play out. Taking it all in though, they start to see some suspicious behavior that has them questioning if perhaps their older neighbor is up to no good. Tracking his every move, the teens start to suspect that the neighbor is hiding a dark secret. Is it worth prying into though, or something better left ignored?

My Teacher, My Obsession (2018; Lucy Loken and Laura Bilgeri)

Okay, okay. This one’s just all in good fun. It’s a totally Lifetime-esque movie that definitely won’t have you scared…but has enough laugh-out-loud creepy vibes to make its way onto my Netflix Halloween picks. (If only for me to have an excuse to talk about it.) It’s a cliched story of a young girl developing an over-the-top obsession with her English teacher. But it’s so well done and over-the-top that it’s the perfect guilty-pleasure movie to enjoy over the Halloween season. I had so much fun watching this movie that I hope they come out with a million sequels.

As it launched arguably the best modern-day horror franchise, The Conjuring no doubt makes it way onto my Netflix Halloween picks for the year. On the off-chance that you’re not familiar with the flick, the film is based off real-life ghost hunters Ed and Lorraine Warren and follows the couple as they try to rid a farmhouse of a dark presence that’s terrorizing the family that lives there. The Conjuring universe gave way to successful spinoffs as Annabelle, The Nun and apparently many more future films coming our way. So going back to where it all began is a must this Halloween season!

If you’re into creepy doll films, The Boy is right up your alley. The plot follows the standard “doll causes all sorts of shenanigans” storyline we’ve all seen a few times before, but it’s still good fun – especially for Halloween. Fans of The Walking Dead will likely enjoy this as well as it stars Lauren Cohan (aka Maggie). She’s hired as a nanny to look after this elderly couple’s little boy – but go figure, their child is actually a doll. From there, have fun with it.