As major backlash continues to play out, let’s have a chat about the ” Laura Lee is cancelled ” scandal and how the beauty community is coming together to shut down racism. 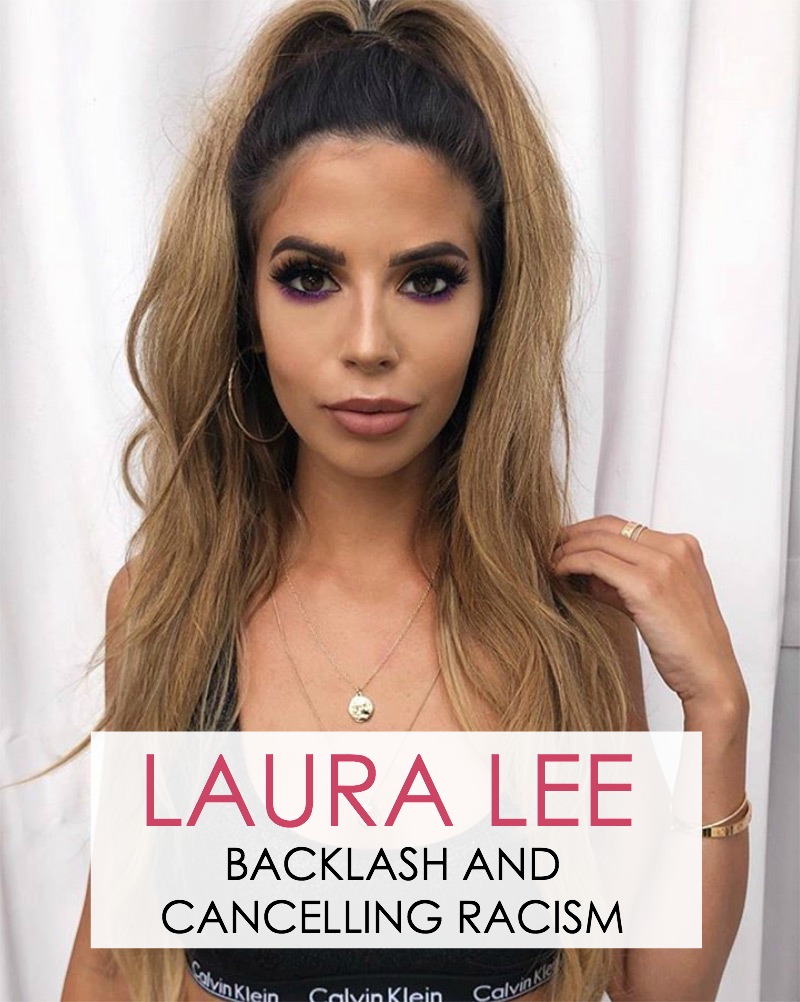 I know, I know. I don’t usually chime in on all the “drama” that circulates the beauty community. But, this week’s fallout from the Laura Lee scandal has made me take note of how the entire beauty community (brands and individuals alike) are coming together to cancel out acts of racism.

Let me back up for a minute.

Laura Lee Backlash I The Backstory

If you’re not familiar with Laura Lee, she’s a beauty guru on YouTube with more than 5 million subscribers, her own cosmetics line and brand partnerships with major names in the beauty industry.

Recently Laura came under fire when some very offensive, ignorant and racist tweets she wrote in 2012 came to light. Given how awful the tweets are, I’m choosing not to share them here but a quick Google search will help you find them if you’re interested.

Laura Lee’s response to her racist remarks being made public was to immediately shutdown her Twitter account. After deleting ALL of her tweets, she later reopened her Twitter and posted a written apology (that was likely written for her by a publicist).

Days later Laura Lee took to her YouTube channel to publish a four minute video where she apologized for “retweeting” racist tweets. From there, things have spiraled out of control.

Her apology video sparked a large backlash for the way she misrepresented the situation and claimed she merely ‘retweeted’ offensive things six years ago…when in actuality she had taken the time to write them out. People also criticized Laura Lee for roughly editing the video and many felt she was actually fake crying on screen.

I have to say, it’s probably one of the worst “apology” videos I’ve ever seen. Check it out for yourself:

Since posting her apology video, Laura Lee has lost 500,000 subscribers (and counting) on YouTube.

After featuring her eyeshadow palette, BoxyCharm‘s CEO posted a video statement that they will no longer have a working relationship with Laura.

Morphe Brushes, of who Laura Lee is a large affiliate, also removed her as a brand partner and are apparently in the process of discontinuing sale of her products as well.

If you’re familiar with the “tea” on this situation, you know there’s definitely a lot more to this story that involves Jeffree Star, Manny MUA and other YouTubers. But for the purposes of this post, I’m not really interested in the drama of their friendship…but more the way society is stepping up to cancel out racism.

We definitely live in an interesting time.

On one hand, the President of the United States has made countless racist remarks without consequence. On the other hand, we have the likes of Roseanne and now Laura Lee losing their careers over racist tweets.

And whether you put it in writing years ago or in a tweet today, racist remarks have the power to affect not just your relationships with others…but your personal business and career as well.

It’s no doubt encouraging to see society trying to hold people accountable for shameful behavior – but is there a point where we accept and move on?

Can We Forgive Racism?

The main reason I wanted to open this discussion here on Dream in Lace is because in Laura Lee’s case – it largely seems the racism was a problem but her mishandling of the situation is what really sparked the downfall of the brand she’s built.

Had her apology been more sincere and felt more honest, would people be inclined to forgive her?

Or, would the backlash have continued?

I subscribed to Laura’s channel sometime last year and have occasionally watched her videos. In February, I had a very brief encounter with her (and Manny MUA) at NYFW when I sat opposite her The Blonds show. While I’ve found her to be entertaining at times, she’s not someone I’ve ever seen to be particularly sincere and this whole situation altogether doesn’t come as big shock.

That said, watching someone losing everything they’ve worked hard for doesn’t sit well either.

In a perfect world, Laura Lee or no one else should ever think or say hateful and racist remarks. If they do, though, I think the road to forgiveness has to begin with sincerely feeling and accepting blame for your actions and opening yourself up to listen to others and learn how to be better.

At this point, there’s no way to say how this will play out in the end. Other major YouTube stars have faced backlash over racist or insensitive comments, only to have the situation blow over and continue on their merry way.

Question is, assuming Laura does come forward with a heartfelt apology – will anyone be willing to forgive her?

I publish new posts every week. Stay up-to-date and receive inspiration straight in your inbox by joining my mailing list. I’d absolutely love to have you along for the ride!