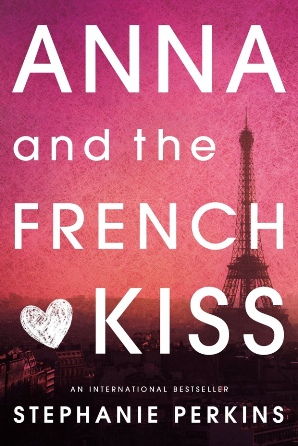 I know, I’m late to the party. As in, SUPER late. So late, that honestly I wouldn’t write a review of Anna and the French Kiss if what I had to say about it was the same thing that the gazillion of women and girls everywhere have already said. It’s become a cult favorite, widely discussed and GUSHED about all over the internet. And I finally read it.

What took me so long? Well, generally chick-lit books aren’t my cup of tea. And I know, it’s technically a ‘young adult contemporary romance!’ novel, to me: young adult contemporary romance = chick lit, only with younger characters. On rare occasion, say every 4-5 years, I get the bug to read something cute, and this time around it was Anna and the French Kiss that came calling.

If you haven’t read the book, I promise I won’t give anything away outside of what you’d read in your average summary. If you’re new to the story, I’ll summarize it as: A senior in high school, Anna, is sent to Paris by her parents to spend a year studying abroad at a boarding school for Americans. As in, this boarding school has only Americans and everyone speaks English. Our introduction to Anna is when she looks at a great life-changing opportunity such as a year in Paris with bitter resentment. She’s crying in her dorm room. She’s staging hunger strikes in the lunch room. She grounds herself to campus, not stepping foot out into the city of Paris for probably a month after moving in. For lack of a better word, the introduction to the nonsensical and melodramtic Anna was: not good.

As a romance, there is of course the love interest Etienne St. Clair, who Anna is taken with at first sight. It was an immediate obsession as quick as Bella Swan with Edward Cullen in the Twilight Saga, except without the mystery. No, rather than being a swoony-vampire Etienne is kind of a jerk. And, I mean kind of in the way that he’s like 100% a jerk. He has a girlfriend, Ellie, who by all accounts is a really nice girl. She’s perky, a bit aloof, but seems kind at heart. Yet somehow Stephanie Perkins thinks I’m going to find it in my heart to conspire against her? When really, Etienne should man up and break things off rather than stringing both Ellie and Anna along for 9 months?

That’s my main issue with this story and why I wanted to open this book up for discussion. Why do we think it is that females everywhere swoon over a story about cheating? Sure, I know there’s more to it than that – but the main source of conflict in this story is just that: cheating. Etienne has his girlfriend Ellie, who he’s no longer in love with, but rather than end the relationship maturely he two-times Ellie for 9 months with his friend Anna. Man, Edward Cullen would never do that! 😉

If you have read Anna and the French Kiss and found this book appealing, I’d really love if you could offer a different perspective. I’m interested to see how you relate to the text and why you rooted for these characters to be together.

Additionally, one more thing that really bothered me about the book: (okay, after Anna being completely hypocritical and backstabbing a good friend while shunning another who ‘backstabbed’ her.) (Trying to reign in my ire about this book. I promise!) Did anyone else read this and see the real blatant jabs at authors Nicholas Sparks and John Green, for writing cheese-tastic stories that use cancer as a narrative device to drive plot? Did anyone else find it completely hypocritical (not to mention rude) as Perkins herself uses cancer, by diagnosing a nameless character we never even meet purely as a plot point?

That bothered me quite a bit. The undertone of Anna’s hatred for her father just because he writes blockbuster sappy love stories was so under-developed and unreasonable, it makes me seriously want dish on the real scoop: What did Nicholas Sparks and/or John Green do to REALLY tick Stephanie Perkins off?

On that note, I’m going to stop there. I really would love some input from anyone who loved this book. Were you just as frustrated by Anna as a narrator as I was? Did you have trouble rooting for her and Etienne as well? Dish!

Do I think the book is all bad? No. Stephanie Perkins is truly a gifted writer. The story developed nicely and while at times detestable, she definitely can write characters we relate to (even when we don’t necessarily like them). As annoying as the melodrama of teen angst can be, it is a true reality. We all go through those vicious unreasonable mood swings at that ‘trying age’. So, I really can’t condemn Perkins for her characters being completely irrational at times.

I teetered between a 2 and a 3 on Good Reads, and ultimately gave this a 2. But it is a light fluffy read if you’re looking for something easy breezy. Besides, if nothing else you get to travel to Paris for a few hours with your imagination. What’s the harm in that?

Sounds like one to miss. I have nothing against characters being jerks but a novel is for lack of a better phrase, supposed to take the reader on a journey. If you write your character as a jerk they damn well better be a well nuanced jerk with some relatable reason or quality otherwise there’s no point in me wasting two/three hours. Sadly books with ‘jerks for the sake of being jerks’ are very in these days. Paaaaaaaaass.