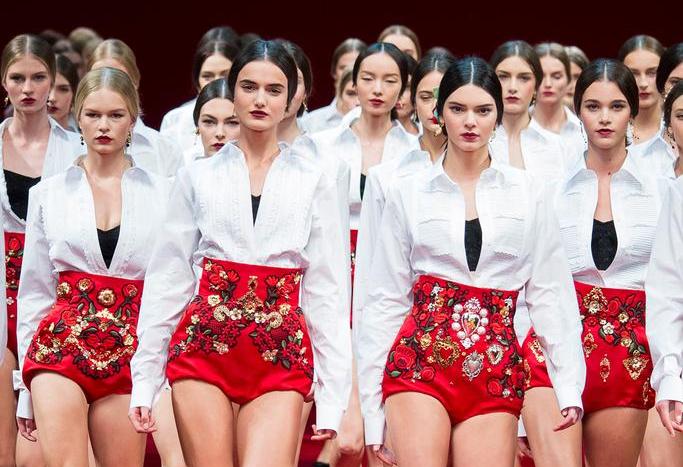 Few designers have the astounding capability to dominate the runways every season, but Domenico Dolce and Stefano Gabbana are definitely of that rare breed. For Dolce and Gabbana‘s runway show this season, we saw an army of Spanish Senoritas tangoing down the runway in a Spanish influenced Spring 2015 Collection. I feel I say this EVERY season, but it was truly a major fashion moment. Just how these Italian masterminds are able to outdo themselves again and again, is beyond me – but it’s certainly nice to sit back and salivate over it all.

In typical fashion, it was red – ornate – royal…and thoroughly dramatic. Crimson red, gold and black remained signature colors of the collection, this time influenced by the Spanish rose and matadors. It was a perfect time to showcase the matador coat, with capes being all the rage right now. It’s not just a take on the trend, but a defining statement.

And per usual, the show ended with an army of models. This season, the silver and gold of recent collections were back-burnered for red and white.

It was a fast-paced show, with models walking on pace to upbeat Spanish music. It was also a very LARGE show, with over 80 looks in total. Lace, gemstones and gold were all accents of the collection – tying together beautiful accessories such as lace stockings, embellished boots and heals, golden crowns and belts and roses in the hair. The bags were small, boxy and look literally stolen from the palace of Versailles. I mean, guys – it was really a stunning show of luxury and decadence. Can I just have it all? Can I have even just a PIECE of it? #Stunning

In case you missed the live-stream of the show, I did find it on YouTube for us all! Watch the runway show here!

There’s really nothing bad about this collection. No, not even in the slightest. I did think of an additional cool thing D&G could do, which is convert the rose hairpieces into rose-headphones. How chic and adorable would that be? Just picture it! 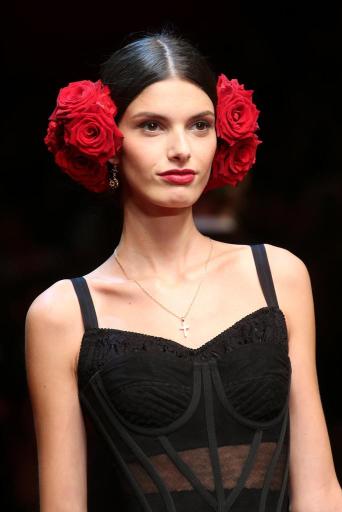 Oh that would be cool!

Anyway, with deep sadness I’m heading off to prepare for tomorrow’s workday. The weekend went by far too quickly for my liking. Then again? What’s new! I do want to say that tomorrow I am taking a break from the Spring 2015 collection coverage to talk about some seriously affordable makeup. So, if you are a makeup junkie like myself – come back for that! And if you watch The Voice, follow me on Twitter because I’m going to be live-tweeting this season (because of my longstanding relationship with Gwen Stefani.) (I mean, not that she knows me…I’ve just followed her since I was a kid. Uh, yea.)

And, if you have missed any of the fashion week coverage here – check out The Fashion Week Directory to get all caught up!

That’s it for now dreamers. Think of roses tomorrow when getting ready!