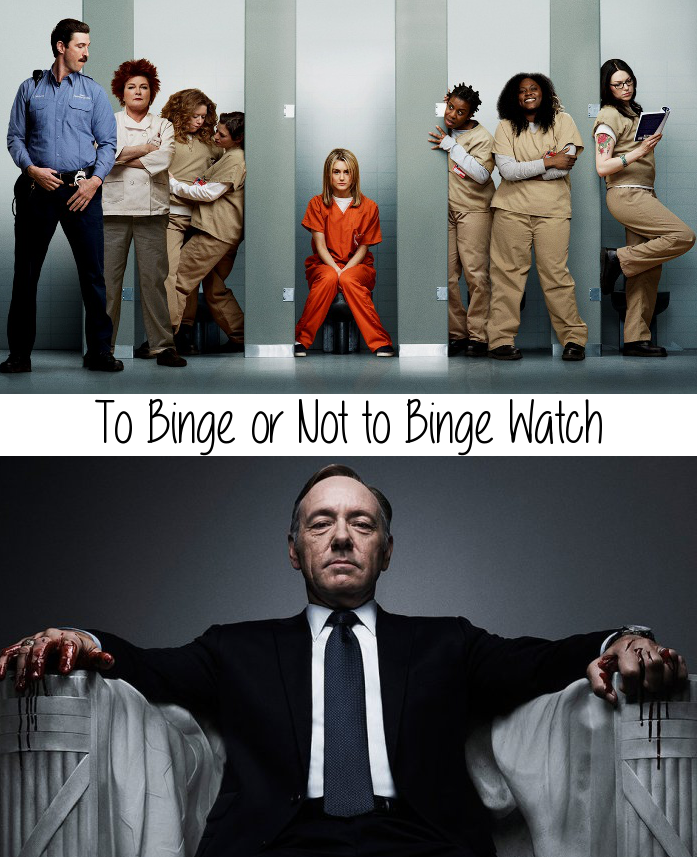 Long before House of Cards or Orange is the New Black, I was a binger. Netflix had that affect on me as soon as they introduced live-streaming. Then, I worked nights and was unable to catch shows as they aired live. The first show I binged on was Dexter. I watched seasons one through three in a span of a month, just in time for the premiere of season four – from which I was forever hooked. Not only was I able to ingest shows in a streaming on-demand format, but also partake in mass consumption. It’s the revolution of television. The demise of live television and the rise of a new era, where we can watch whatever we want, anytime we want and as much as we want. No more am I having to skim the TV guide and make note of when my shows are on, because they’re on whenever I want them to be! Plus, with the rise of platforms like Netflix, there are so many original shows that you can only get online, which makes the idea of binge watching shows something that many of us can do. With this being said, not everything is on Netlix, so you may have to find another streaming service if you want to catch up on shows such as Keeping Up With The Kardashians. Maybe Hulu might be the service for you in this situation. If you are not familiar with this service, it might be worth you reading something like a hulu live tv review, just so you get more of an understanding of what this streaming service can provide you with, in order to successful binge watch your favourite TV shows.

You may have thought that the rise in popularity and release of online streaming services such as Netflix and Hulu would have an effect on the number of people who continue to watch cable tv, for example. But actually, many people including the elderly still enjoy the programs that they can watch with this service. So much so that, in 2017, 63% of the 68 and over age group still continue to pay for cable, you can find more cable tv statistics here. If you think about it, this is probably expected as fewer older people could be less likely to use streaming websites, with the possibility of the technology being too advanced for them. At least it gives us more choice anyway!

And having the power to ‘binge watch’ television programs, from Dexter all the way to Downton Abbey with The Tudors, Homeland and more in between…I have really started to feel that some shows are just better in large quantities. I.E. True Blood in that the show is somehow better when viewed in a marathon or Reign, which I started to marathon just because one episode was just never enough! It’s truly changed the way I view television. And, oddly enough…it’s dramatically cut back on the amount of time that I do watch television.

Lack of commercials aside, it’s really cut out the bullsh*t,so to speak. Not watching any live television dramatically trims the fat. No more am I flipping around television aimlessly, wasting time on fluff. Instead I sit down, know exactly what I’m going to watch…and then I’m back to life and moving on. Not being chained to the time-table of a cable provider is so freeing that it literally gives you your life back. I’ve started looking at the best 70 inch tv since I love watching TV so much. Some Sundays I’m watching TV all afternoon. But then there’s weeks and months at a time when I’m watching none. And I’m blissfully unaware of all the random, needless reality shows I stumbled upon back when I actually turned on the cable box. The difference between quality television and trash television is vast to say the less. The best TV deserves to be watched on the finest Home Cinema Room, whilst trash TV deserves to be watched in a dumpster.

In fact, I like binge watching so much that I routinely end up five or more episodes behind on a show I love…on purpose. No, I don’t need to wait for Netflix to drop a full season at once…I’ll just hold off until I’m a full season behind and then drop it on myself! Turns out I like more than my Orange is the New Black and House of Cards in bulk.

So what about you? Are you a binger? Or are you still on a regular diet of live television?