You know it’s been a long week when you wake up on Wednesday in a near panic over the fact that it is…well, only Wednesday. It’s one of those weeks were things moved at, well, whatever the opposite of warped speed is. A snail’s pace? That said though, it has been a really good week with lots of things getting checked off my To Do list. Perhaps that’s why it felt like such a slow week…because I was accomplishing so much I was blowing even myself away! ha!

Here’s a few snapshots from my iPhone and Instagram account this week. I’ve decided to be totally 21st Century vain in this post and show pics from the week at hand. I am a Millennial after all! 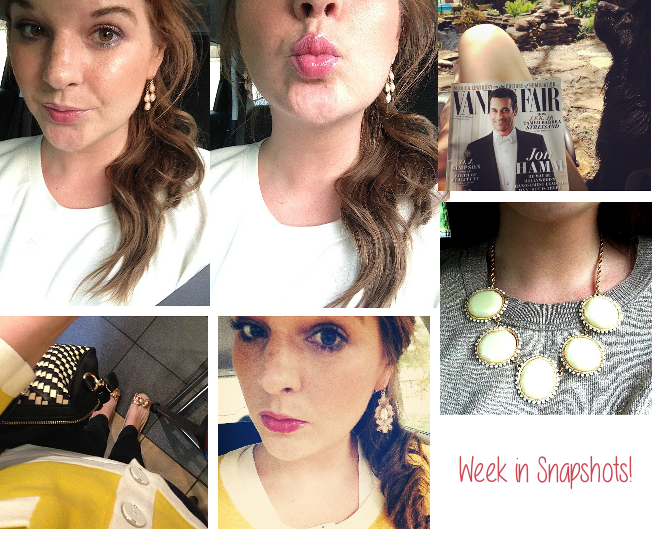 Given that I came up with this idea on Thursday night, I might have been a bit late in the game when it came to acquiring weekly snapshots. But this week I did pick up some goodies at New York and Company that had me pretty happy. A gorgeous necklace, pair of earrings and new bag all came from them into my possession and I couldn’t be more thrilled. There was also a really fabulous pair of sunglasses my dog sat on and so well, that was the end of those! So what if I took advantage of Mother’s Day sales when I’m not a mother? It’s allowed!

And of course, Jon Hamm kept me cozy on Sunday with the latest edition of Vanity Fair and my television screen both being blessed by his beautiful presence. What can I say, I continue to be all about the Mad Men thing. *psst*Here’s this week’s Fashion Recap if you missed it *psst*

As far as the internet world goes, I was really mostly about the Cannes Film Festival happening…and the occasional Cruise 2015 Collection (Hello Chanel!). But I did snatch up a few other bits of prose you might enjoy:

THE HIT LIST
Bone Thin Mannequin at La Perla  – Elle Magazine
Skeletal mannequins. Hot or Not? Decidedly not!
Why Crying at Work Takes Courage  – Chapter Friday
Ever since I had a horrific and tearful bad afternoon at work I’ve found solace in reading about other inappropriate meltdowns at the work place. I think in a way it’s a good thing, because it shows that you’re committed to your work. Sure, totally stressed and overwhelmed but also 100% on board with getting the job done well.
12 Thoughts All Women Have During the Work Day  – Chapter Friday
Yes. Yes. and Yes! to all of these!
50 Most Stylish TV Shows Ever – Fab Sugar
While some of these shows have me like, what? (Dawson’s Creek? People. No one cares about Dawson’s Creek fashion!)…in general, I think we can all agree that some shows are made better by their style. Gossip Girl, Sex and the City, etc. I would have to add recent shows like Pretty Little Liars, Reign, Revenge and even Hart of Dixie to the list. What shows do you find most stylish?
Cate Blanchett’s Style Transformation – The Style List

Amid dying for a Cate Blanchett spotting at the Cannes Film Festival, I really enjoyed this glimpse back at her style evolution. The early days are perhaps the most interesting!

And that’s been my week in a nutshell! I’m starting to get really excited about enjoying summer. With my back surgeries and such keeping me back the past few years — I’m so happy to be able to actually have fun for a change! What are you most looking forward to getting into this summer?