Confession time: I’ve started and failed to finish Divergent now four times. Four times I have tried, and miserably failed, to complete a book targeted for the tween fanbase. Wow. And it’s not even like I got into the meat of the story. Oh, no! I couldn’t make it three chapters! Talk about lack of dedication. And, I don’t mean this as any insult to Veronica Roth. In fact, this probably says more about my weak attention span these days than anything. Because surely Veronica is at least a ‘pretty decent’ author to have so many people worked up over the film’s debut.

Cut to Shailene Woodley cast as Tris and my interest was really put to the test. I have not, nor do I ever intend to see Secret Life of an American Teenager. But, as a fan of Pretty Little Liars I’ve been forced to sit through numerous painful-to-watch promos and it seriously looked like maybe the worst show of all time. Okay, that could be a stretch…but it is definitely up there! So, warming up to Shailene as a serious actress will take a lot of work on my her part, you know…to forget the silly sappiness of her ABC Family days. What’s a girl to do to start to win me over? Dapple into couture closets for starters, of course! 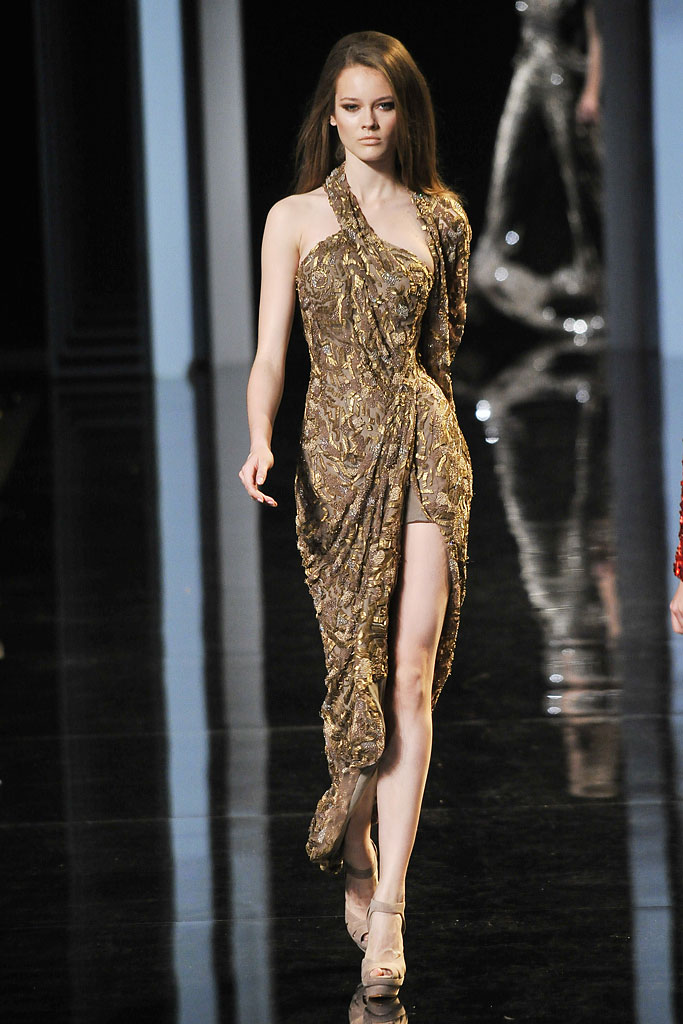 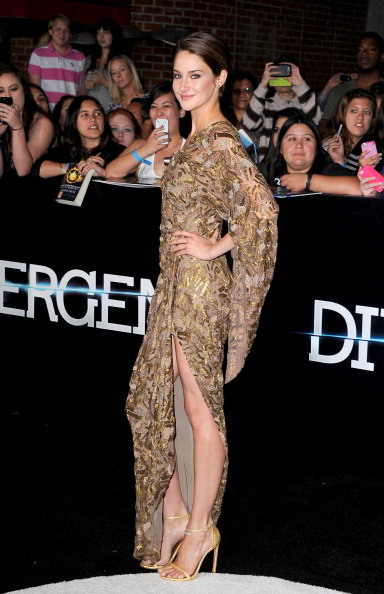 Seen at the LA Divergent premiere in Elie Saab Fall 2010 Couture is Shailene, with her darling haircut looking ever so coifed. The hair may not have won me over in the beginning; but it is certainly tugging at my heartstrings now. What excites me about this, is how unconventional of a choice this is. It would be so easy to throw on one of the beautiful, yet predictable, beaded gowns of Elie Saab and look ‘lovely’ at the premiere. It would be a safe route yes, but very much elegant and dignified. To pluck this out of the Fall 2010 Couture line is definitely a bit of a twist.

First, seeing this only makes me wish Elie Saab would break the mold they’ve built around themselves down because this gown is a whole lot of work turned into a whole lot of fun! It’s sexy! And let’s be real, sexy isn’t a top adjective that pops in my mind to describe Elie Saab. But with a high slit and with a draping one-shouldered cut, a new side of both Elie Saab and Shailene comes to life.

So yes, Shailene is slowly seducing me over the dark side (or is the light side) with this beautiful, intricate and ornate gown. She has also established quite a presence on the red carpet, which is encouraging. I remember the awards season she was nominated for that flick with Mr. Clooney and just how awkward she looked. It’s nice to see her become more comfortable in her skin! Us girls have all been there. It’s sort of a right of passage to feel completely foreign in your own skin…but you can see Shailene leaving that behind. You see it in her posture and the way she carries herself proudly. Perhaps she’s really shrugging off the awkward teenager from her Secret Life past…and emerging into a true it-girl. With Divergent and the upcoming The Fault in Our Stars under her belt, 2014 is going to be a big year for her! Now, I’m excited to see her find her footing in fashion…and also, I’m suddenly wanting to start Divergent for the 5th time.

What do you think about Shailene Woodley guys? Are you excited to see her blossom? Oh, also have you read Divergent? If so…please give me encouraging words to finally finish! 😉